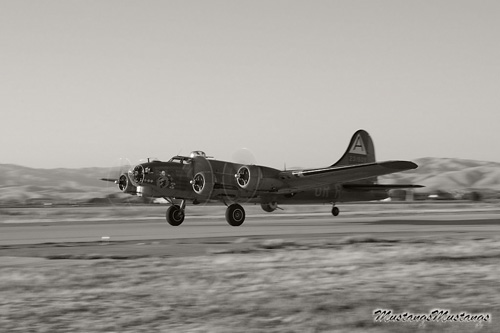 Ah yes, the bombers. I am very partial to the B-17 for many reasons. The Flying Fortress took on the Luftwaffe in daylight raids over Germany. There were heavy losses, but the damage to the enemy was enormous. The B-24 also flew in Germany and in many low-level missions to cripple the German oil supplies. The B-25 flew in all the war fronts. The B-17 was not stuck in Europe. The Fortress served in many Pacific Island bases. The range of the B-17 and B-24 allowed the allies to hit the Japanese from long distances.

My uncle flew left seat in the B-17 out of Great Ashfield. He was 19 or 20 and flew in the fall of 1943 when escort was sparse, but very needed. He and his crew were shot down in December of 1943. Those who made it out, spent the rest of the war in one of the Stalags. Uncle Jack was in Stalag Luft 3 for 18 months. He said that in May 1945 when the allies were getting close, the Germans at the Stalag just packed up and left, quickly!