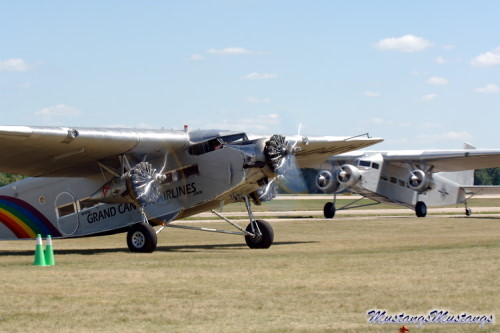 EAA estimates that over 700,000 people were in attendance this year! That's 7 percent more than 2004. With almost 3000 showplanes to look at, I think a week is not enough. So if everyone averaged a 4 day visit, that is 58 people standing around each showplane at the same time. Good thing there is tons of other stuff to do or you would never get any clean pics. Airventure is a world wide attraction and recorded visitors from 65 nations with Canada as lead, then Australia, Germany, Brazil and South Africa. In all, over 10,000 aircraft land at Wittman or vicinity airports for Airventure.

Media? Well, the EAA says that 904 media personnel attended this year. Camera equipment? Yea, tons of it. Cameras from the throw-aways to enough mega-pixels and long glass to pick up the space shuttle in orbit. The EAA has its own staff of photographers and video crews doing interviews and shooting everywhere. It is challenging (to say the least) to not get other photographers or fans in your pics. Some patience or different angles is a must. Sometimes you have no choice. Either get some folks in the shot or don't take it. The main runway gives you good light for the afternoon, but watch backlighting in the morning.

During the day they operate both runways and with the wind changing during the day, you never know which way departures are going. So if you like departure shots, keep checking the wind, but wait, they depart downwind sometimes. I got caught at the wrong end at least once.

You can easily spend a whole day away from the flightline. There are many vendors to browse, kit airplanes, forums and fly-in aircraft. Many vendors put on top-notch displays. And if you're a kid, the military lets you fly some of their simulators. Kids have all the fun.