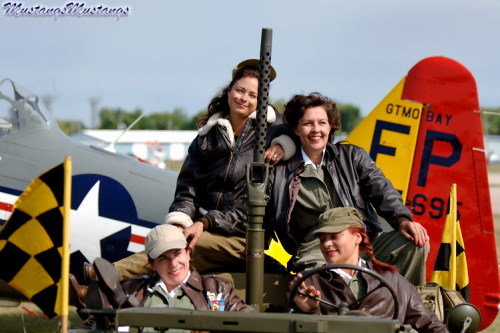 Although EAA Airventure is a "convention", there is a very good airshow that includes many warbirds during the afternoon. Check the listings if you only have a day or two to be here. The warbirds do not fly every day. This year, Glacier Girl only flew Monday to Wednesday and Thursday was the last day of the Heritage Flight. I missed the Heritage flight with the P-38 as I was at the show Thursday to Sunday. By saturday, one or two of the B-17s had departed.

Saturday is the busiest spectator day, at least by how many people I ran into trying to get around. So if you want a good show spot for photos or video, get a spot early. Bring a chair or plop down on the grass, there is plenty of room along the flight line but it gets real crowded near show center. The show is good but not spectacular. But like I said, where can you find so much aviation stuff in one place and a very good show. You won't find the Blue Angles or USAF Thunderbirds at Oshkosh. The main military iron was an AV-8 Harrier and some USAF jets (F-4, F-16, F-15) for the Heritage Flight. The only solo military performance was the Harrier (noisy, but cool).

There was an air racing demo each show with Bob Odegaard in his FG-1D, Jimmy Leeward in his P-51 "Cloud Dancer" and Bob "Hoot" Gibson in his Sea Fury. They have fun and entertain the crowd. Rutan's Spaceship One and White Knight flew, which was pretty cool to see. The Global Flyer flown by Steve Fossett also took to the skies. You should have seen the wings flex. Check out some of the pics, it looks there is not much room inside that cockpit and you can barely see the pilot's head poking up in the mini canopy.

What airshow does not have some aerobatic routines? Oshkosh had some really nice acts to watch. The flying in these aerobatic aircraft just gets better and better - very exciting and precise. Ultralights fly in the am from the ultralight base to the south end of the property. There is a sea base nearby as well.

As you can see, there is not much missing from EAA Airventure. Unless you are a die hard military aviation guy, there is something for you at Airventure. So get out the calendar and start planning for your trip next July as Airventure 2006 awaits you.