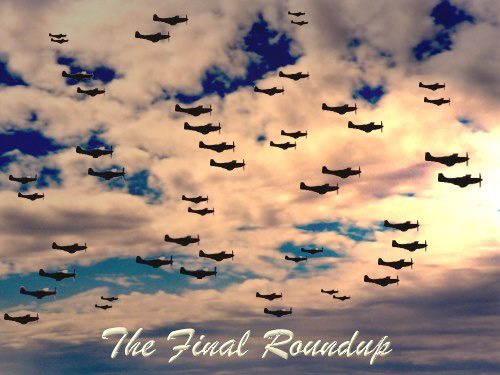 The gathering of all gatherings.

The show everyone had been impatiently waiting for is done.

Oh, but that sweet sound of the V-12 Rolls-Royce Merlin did resonate for four wonderful days. The sound of 20 P-51s overhead is incredible! I want to see and hear that again. What a sight, and yes, what a sound.

Rows and rows of P-51 Mustangs did make the trip to Columbus, 77 to be exact. Not the 100 everyone was hoping, but 77 must be some kind of record amount of WWII's finest fighter. I cannot think of any other WWII fighter that has that many airworthy aircraft let alone at the same show.

From Canada to Mexico, California to the UK, P-51 Mustangs covered the ramp at Rickenbacker Airport in Columbus Ohio. Fans came from many countries to see the WWII Legends and their WWII fighter together again.

Thursday, the show began ... uh ... with rain and bad weather. Only about 25 P-51s were present before Thursday because of bad weather in the midwest. Mustangs were hanging around airports a few hundred miles behind the front just waiting for the front to pass Columbus. Not much happened on Thursday until the weather improved enough for safe VFR flight. That did not happen until mid-late afternoon and then P-51 arrivals began and were steady until the evening.

John Deere tractors were running aound the site with P-51s attached to their tow bars continually Thursday afternoon and evening. The ground crews kept up with the demand as they towed P-51s from the hot ramp to the photo hangar or their numbered parking slot.

After all the lousy weather passed, Friday, Saturday and Sunday were all great weather days for such a once in a lifetime show. Friday's crowd was large, Saturday was huge and Sunday was back to large.

One of the most talked about flying routines is called "The Horseman". Jim Beasley and Ed Shipley perform a two ship act that is not routine. Shipley is glued to Beasley's wing and then they change to the stacked formation where Shipley is underneath and slightly behind the lead P-51.

There were also other warbirds at the show like the P-40, P-38, P-63, P-47, B-17, B-25 ... and a Lancaster. That was soooo cooool to see and hear. They had a wall of fire that was unreal. I can still feel the heat. Jet fighter performances by the F-16, F-15 and the F-22 with each performing a separate Heritage flight. The USAF Thunderbirds performed a very nice show.

It is hard to believe, (I knew it would be) but it is over and done. What a great time. Yeah, the traffic was bad and there were a few things like that, but this show will go down as one of the great shows of our lifetime. I saw many smiling and happy WWII legends. That was worth the trip alone.

This was the big one, the last one of this magnitude ... The Final Roundup.

Official GML 2007 webpage
Thank you to Lee Lauderback and all the great staff at Stallion 51 for organizing this event.