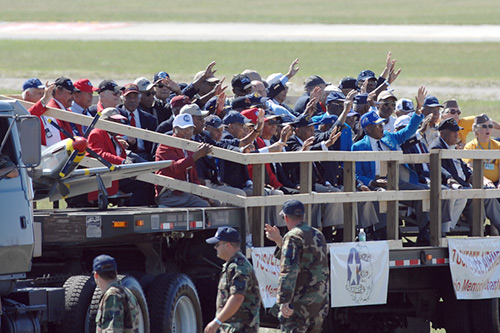 Where do you start? How do you say thank you?

Thanks for what, they say? We were just doing our job. We were just trying not to get killed. "I was just lucky" said a WWII vet, "the good Lord spared me that day".

We say thanks for many reasons. Not to glorify war as some think. I say thank you to all the vets of WWII because they ran to the fight, not from it like others. Were they scared? Yea, I bet most were scared at some point during their missions. Many have said so. Others get through that by being confident, even cocky, sometimes for the sole purpose of masking such fear. Most keep the reasons simple: "it was my duty" or "I was ordered to go" but I think it also goes deeper than that.

There was a great sense of duty and honor back then. In my father's family, my grandfather served earlier in his life and all four of his sons of age served in WWII (and all returned). Two were in aircraft, two on ships, if I remember correctly.

The attack on Pearl Harbor reached deep into the U.S. and also attacked the pride of country that many young men and women had. It did wake the sleeping giant in them and they did rush to defend their country.

I hope you had a chance to visit the Legends' tent. There were some very nice displays, photos and stories. The legends were available for book signing and autographs. The lines were long a few times. Many of you took the time to stop and say thanks. I know they appreciated that.

What many of them did in WWII and throughout their careers was more than just duty ... more than just an order. They were defending their honor, their families, the guy in the bunk next to them. They were defending their very right to live as free men. I, and many many more, am thankful that this great generation was around when we needed them most.

During the day on Saturday, the Tuskeegee Airmen were given a well deserved tribute for their work and sacrifice during the war. A Tuskegee Airman with a booming voice sang for the crowd in a very moving piece:
"Proud to be an American"

If tomorrow all the things were gone I'd worked for all my life
and I had to start again
With just my children and my wife
I'd thank my lucky stars to be living here today
Cause the flag still stands for freedom
And they can't take that away.

Chorus: And I'm proud to be an American
Where at least I know I'm free.
And I won't forget the men who died
Who gave that right to me.
And I gladly stand up next to you
And defend her still today.
Cause there ain't no doubt I love this land.
God bless the U. S. A.

From the lakes of Minnisota
To the hills of Tennesse
Across the plains of Texas
From sea to shinning sea
From Detroit down to Houston
From New York to L. A.
There's a pride in every American heart
And it's time we stand and say

Chorus: And I'm proud to be an American
Where at least I know I'm free.
And I won't forget the men who died
Who gave that right to me.
And I gladly stand up next to you
And defend her still today.
Cause there ain't no doubt I love this land.
God bless the U. S. A.

Thank you to all the vets and service men and women!