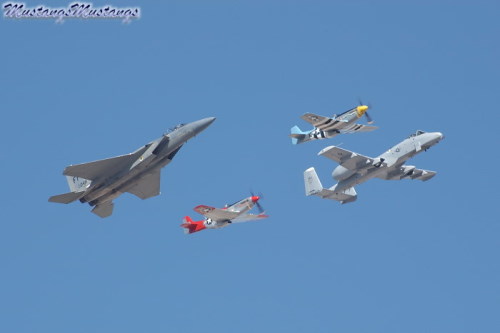 Remember, this is the Air Force. Show starts early. Don't think you can cruise in at 11:30 and still catch all the flying. The US Navy F/A-18 Demo is at 9:05 am followed by the Mig-17 and the US Army Golden Knights. Ed Hamill performs an aerobatic routine right before the USAF A-10 Thunderbolt II Demo.

At 11 am the crowd is welcomed to the show with a flyby of the F/A-22 Raptor. The F-117 stealth fighter is next followed by the Red Baron Pizza Biplane Squadron (say that 5 times fast). An F-14 demo is performed (boring right?) and then the Las Vegas unlimited air racing display.

Filling out the show are the USAF Heritage Flight, Sean Tucker in the Oracle Challenger, an F-15 demo and the D-day Tribute. The D-day routine had many warbirds up including a B-25 or two, a BF-109 and a Fairey Firefly. Flying clean-up are the USAF Thunderbirds, the day's final performance.

This page is highlighting the props. The two main prop aircraft displays were the air racing demo and the 60th D-Day Tribute. The air racing included the beloved unlimiteds like Dago Red, Rare Bear, Ridge Runner III, Voodoo, Precious Metal and Miss America. Also thrown in were a T-6, an L-39 and a newcomer to the sport class, #4 Unleashed. You may recognize the name of Scotty Germain, pilot/owner of "Unleashed". Scotty is the webmaster of Warbird Aero Press.com and has put together an excellent air racing themed web site that is worth hours of browsing. You will notice many pics he has graciously loaned MustangsMustangs throughout the survivors pages.

If I remember correctly, Dan Martin was dogging it during the race but was really sandbagging and towards the end, snuck up and passed everyone. We are waiting for that to happen at Reno. Dan flies the stock P-51D Ridge Runner III. During the month of Sepetember, this P-51 is a wolf in sheep's clothing as Dan burns around the course in the mid 400's. Dago Red is a highly modified P-51 racer dedicated to Reno Air Racing. Dago has won the Championship Air Races for the last 5 years, but in September of 2004, Rare Bear took first place breaking the streak.

Brent Hisey in Miss America was on site at Nellis. Miss America is the most recognized P-51 air racer. That red-white-blue look goes way back into the 70's. Another P-51 at Nellis was Bob Button's "Voodoo" flown by Curt Brown. Certainly the farthest from a war-time paint scheme, but if you get real close you will see that it is done very well. The most modified racer has to be #38 Precious Metal owned and flown by Ron Bucarelli. This highly modified racer has some P-51 in it but much was changed to fit the large Rolls-Royce Griffon engine up front with the two contra-rotating props that pull it around the pylons.

The 60th year after the invasion of Normandy: D-Day is here. 1944-2004 is a long time to reflect on. Some of the aircraft and veterans, that were a part of this massive assult, were on hand at Nellis. Warbird aircraft flew the circuit around Nellis dropping bombs (fake of course) and fighting off any enemy aircraft that might stand in their way. There was a BF-109 present at the show, but he was far outnumbered and did not stand a chance. P-51s and B-25s along with a Fairey Firefly and a C-47 put on a show for the crowd that involved many passes and a huuuugggggeee wall of fire (I know we've seen that before, but it still makes you look and say "wwoohh"). The B-17 flew on Saturday but lost an engine and did not fly Sunday.

In all, a very entertaining display of WWII power. The props have done good so far. We've seen unlimited air racing, formation Stearman flight, full aerobatics and the WWII D-Day show. Hmmm, can the jets even come close to this?