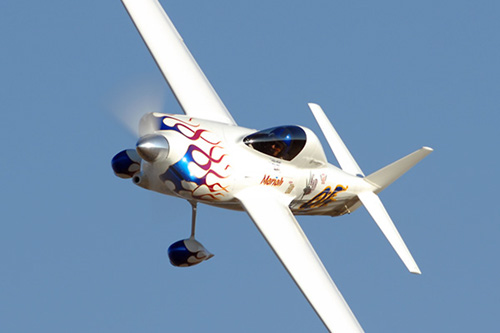 These are the first fatal accidents at the races since 2002. Our hearts and prayers go out to the crews, friends and families of these racers.

After the qualifying was over on Tuesday, Steve Dari was out to do some test flying in the racing biplane #3, "Rose Peregrine". I wittnessed this crash. The aircraft rolled down runway 8 and (to me) seemed like a long run. Once airborne the biplane climbed slowly then coughed, sputtered, coughed again with some smoke and then quit. The aircraft was across from the grandstands by now less than 200' agl. With little of runway 8 left, the aircraft turned and decended. Dari impacted the infield between runway 8 and 32.

Dari was a Reno Air Races veteran of many years.

Thursday 13 September: During the Jet race in the afternoon, Brad Morehouse flying L-39 "Dino Juice" #4 which qualified at over 500 mph, encountered wake turbulence just after pylon 9 in front of the pits. I was at pylon 2 and I only saw jets pull up off the course just as it happened. Wittnesses said that Morehouse was abruptly knocked inverted by the turbulence. Morehouse then righted himself but descent rate was too high and the aircraft impacted the ground after he recovered. The jet exploded on impact and a fire ensued for a short time as emergency crews hurried to the scene.

Friday 14 September: During Formula 1 Heat 2a, #1 qualifier Gary Hubler in #95 "Mariah" and Jason Somes in "Alley Cat" #4 contacted each other. Hubler's aircraft immediately went to the ground while Somes fought for control of #4 and set down on the desert floor. Somes was sent to the hospital with an eye and head injury. Somes was treated and released the following day. He returned to the races with a bandaged eye. Hubler was killed. Two pylon judges were also injured by falling debri. Gary Hubler, 51, was an air race veteran racing since 1984 and a former champion for the last five years at Reno.

This is a dangerous sport. Aviation has its inherent dangers that we as pilots take on each time we strap in. But we continue to do so knowing the risks and taking measures to fly safely. Air racing has far more dangers than cruising around in a Cub. These pilots are trained, experienced and the best at what they do. They knowingly accept these risks doing everything within their ability to come back safely to earth after each take off.

The races were continued on Saturday and Sunday with safety. While we mourn the loss of pilots and friends, they would have it no other way ... but to keep flying.