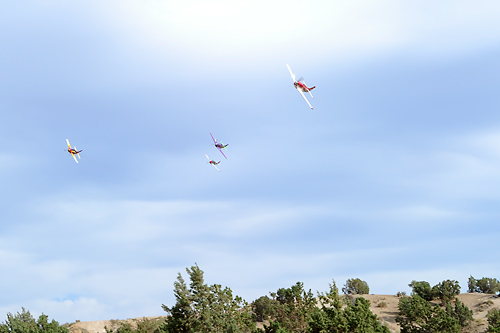 
Freshman racers this year: Rod Lewis was flying his Tigercat. He also owns Rare Bear and the other Tigercat at the races plus many more warbirds. Chuck Greenhill who brought (2) P-51 Mustangs to the Races, "Geraldine" and "Lou IV".

Cool but strange year for the unlimiteds. Cool is the fact that I cannot remember a year that had so many types of unlimiteds racers. I counted 10 types, not sub-types. That is cool! Stange? Only one Sea Fury in sight! Dreadnought was the lone Sea Fury this year. Also only one Bearcat, because Howard Pardue did particitpate in the Air Races this year.

More strange? How about the super-dependable #8 Sea Fury Dreadnought had to stand down for the week! They took off for the Friday Heat, but landed before the start. They found metal in the screens. Now there are zero (0) Sea Furies in competition at the 2010 Reno Air Races! Mike Brown retired after the 2008 Air Races and sold his racers to Rod Lewis. September Fury, the fastest Sea Fury today, and September Pops are not racing. The colorful Sea Fury, Spirit of Texas is not racing this year either.

Ok, back to cool stuff. Bob Button, the owner of Voodoo #5 has made some big changes and the results are clear. "Kerch", Bill Kerchenfaut, legendary unlimited crew chief with many gold wins, is taking care of Voodoo. They have worked all year cleaning up the airframe and now Voodoo is slick and fast with speeds around 480 with great potential to go even faster. They are looking to knock-off the Champion from the last two years, Steve Hinton Jr in #7 Strega after passing another past Champion, John Penney in #77 Rare Bear.

More cool: Dan Martin is returning with Ridge Runner III and the Ridge Runner Crew has been very busy in 2010. Remember, this is a stock P-51 that is transformed in the summer to the fastest "stock" P-51 in the field. Ridge Runner retains the stock D canopy and fuselage and tail. The wings are shortened a bit to the production break, a fairly easy mod. A custom scoop by Mike is installed with some super-duper-secret cooling mods. Telemetry and some in-cockpit cameras are added and up front is an Air Sparrow modified Rolls Royce Merlin V-12. All this adds up to a stocker morphed into a modified unlimited racer with speeds in the 470 range and most likely more! Martin is a seasoned race pilot and a high-time P-51 pilot. Nobody has produced the speeds that Martin and his crew have without using a 100% dedicated racer.

So we have four racers that are capable of speeds of 480 and more. This should be a very exciting Gold Race on Sunday. But what about the Ghost? The Ghost did not qualify and must start last in the field. Does anyone really know how fast she is?

Let's find out what happens ...

Well, first some bad news. After several successful test flights in August and September, the Ridge Runner III Merlin spun a bearing on one of the last planned flights before leaving Hollister, Ca for Reno. Ugh! The team pulled the motor, and Mike Barrow worked hard to make repairs in the short time they had. Battling the clock they were airborne late Tuesday evening for Reno arriving at dusk. Martin qualified on Wednesday securing 6th at 412 mph.

Thursday:
The top 6 qualifiers have a bye, but everyone else races including Leeward in the Galloping Ghost. Leeward never qualified and like Martin in the Grim Reaper they start last and have to work up the field. The Grim Reaper is a stock show plane and will only be using minimal power during the week. Leeward in the Ghost is a dark horse with very high speed potential, but no one knows yet. He will have to win every heat race to get to the Gold on Sunday.

The Ghost toys with Martin, flying the outside wing until the last lap and pushes the throttle up and wins the Meddalion Heat. Check out the line up in this heat: Racing P-51, Stock P-51, Corsair, T-28, Wildcat and a Focke-Wulf! The Bronze Heat has mostly Mustangs, with the P-40 and a Yak. Rob Patterson wins in Lady Jo at 344 mph. The last unlimited heat Thursday is the Silver. This is cool, the two Tigercats are in the same heat with Stu Eberhardt in Merlins Magic sandwiched in between. John Maloney wins in Steadfast at 369 mph.

Friday:
Leeward is starting last in Bronze and has to win. That was not a problem and he walks away at 364 mph. The Ghost cruised the first laps and then showed us some speed the last few laps. The Silver heat again had the two tigercats and again Eberhardt was in the middle of them. Stu Dawson was first in "Here Kitty Kitty" at 371 mph.

Now ... the fastest of the unlimiteds will race for the first time in 2010. Hinton has the pole in Strega, with Voodoo, Rare Bear, Dreadnought, Miss America and Ridge Runner in line. Some clouds started to roll in before the Gold Heat and settled in on the east side of the airport. As they start down the chute, I notice Dreadnought landing with engine problems. Strega sounds good and holds the lead all through the race. Voodoo is also looking good finishing 2nd but Whiteside cut pylon 6 on lap 1 giving up 2nd to Rare Bear. Ridge Runner passed Miss America without any trouble and finished 4th. Final: Strega, Rare Bear, Voodoo, Ridge Runner, Miss America and Steadfast.

Later Friday evening I was in the Ridge Runner pit when they pulled the screens and found bad news. The engine is producing too much metal and is not safe to fly. What a blow to the Ridge Runner Crew. After starting very early with everything looking good, then losing an engine just before the races and thrashing to get to Reno, then they had to pull off the prop and fix a leak on Thursday and now they are out for 2010. Air Racing is unforgiving and unpredictable.

Saturday:
Doug Mathews in his Corsair wins the Bronze heat at 329 mph. The rest of the field: Shiska Suka, Lou IV, The Bear (T-28), Air Biscuit and the FW-190 did not finish. Jimmy Leeward bumped up to Silver from Friday and again easily wins his heat finishing at 373 mph. Second and third go to Sparky and Lady Jo, the rest: Geraldine, Polar Bear, Speedball Alice, Parrothead, Grim Reaper. With Ridge Runner and Dreadnought out of the Gold, the Tigercats and Eberhardt moved up.

Strega looks unbeatable as Hinton Jr flies a near perfect line to finish in first at 473 mph. Voodo was close behind most of the race but pulled out with a mayday during lap 5. No smoke ... good. They had a problem with the intake trunk and suspect something broke off and entered the engine. They worked almost all night Saturday to get it running shape again (with a little help from Race 20). Rare Bear is 2nd at 447 and rest of the field was way back. Again, Eberhardt is between the two Tigercats. Now we have the Ghost in the Finals on Sunday with a healthy Strega, Voodoo and Rare Bear. Even though Ridge Runner and Dreadnought are out, it is still going to be a good race ... or is it?

Sunday:
In the morning Bronze Heat, the Yak "Shiska Suka" wins at 317 mph. Not exactly exciting speed, but that Merlin sound is always good. Only 5 racers in the Bronze: The Bear (T-28), Air Biscuit, Lou IV, FW-190. The wind is forecast to be strong in the afternoon and is already blowing at a good clip in the morning. I was told by a local that if it is windy in the morning, it almost always gets worse by the afternoon. Fingers are crossed, we all want a fun, fast and safe Gold race Sunday afternoon.

The Silver Heat was interesting, at least the results and speed. Lady Jo wins at 342 mph. Brant Seghetti in Sparky is 2nd at 338, with Geraldine, Polar Bear, Speedball Alice, Grim Reaper, Parothead and Corsair finishing up. Lady Jo bumps up to the Gold and Brant Seghetti in Sparky comes away with a Silver Trophy! Congrats to Brant and the Seghetti crew, they are great people. So Lady Jo is in the Gold Final on Sunday. Not sure if anyone would have predicted that.

It is windy now, I am sure that is why the speeds were down in the Silver Heat. The Silver racers elected to land on the closed runway 18. 18 is busted up but has new paving down the center that it is only about 30 feet wide (guessing). It takes a ton of skill to put a racing warbird down on that in heavy winds. There is concern for pilots being able to handle any maydays with winds gusting over 30 knots and not blowing down either long runway. The T-6s elect not to race their Gold Final. The jets race with a bumpy ride, but no problems. The Super Sport Final, had some problems when Giboney in his razor-back Thunder Mustang lost his engine and then cart-wheeled after running off the side runway 26. Luckily he came out OK.

We wait ... they do the unlimited introductions at show center, we wait some more. They are past time for engine starts. Are they racing? They are ready to go, but no engines starting. Then finally the decision to cancel the Gold Final for 2010! NOOOOOO! As a fan you want to see the race, but as a pilot you know the risks involved. The wind was strong and not down any runway except the closed 18 which is not very safe and is considerably shorter than 14/32 or 8/26. Landing a tail-dragger in gusting crosswinds is not fun but safely landing a tail-dragger modified racer with short wings and a busted engine with oil on your windscreen in gusting crosswinds is nearly impossible. The pilots were involved in the decision. It is disappointing, but understandable. They all go home to race next year.

In all an excellent racing week that only leaves you wanting and begging for September 2011.