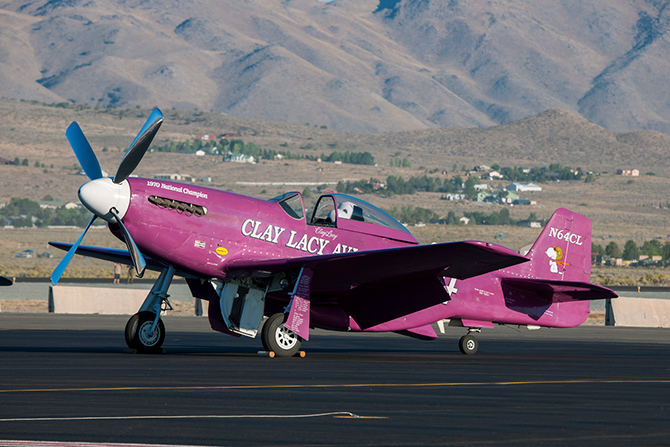 Congratulations to the Reno Air Racing Association, the pilots/crews and the fans. The past few years have been a battle to keep the races going. After the crash of Jimmy Leeward in 2011, the FAA decided to impose new safety rules, insurance went up and speculation mounted as to whether we would be racing again. RARA persisted and we will be racing into the next 50 years!

1964 was the first Reno Air Race organized by Bill Stead and held at Sky Ranch Airfield, a short dirt strip in Reno. In 1966 Stead AFB was closed and the venue was moved to its current home Stead Field. Stead Field is named after Bill's brother Croston Stead. The classes have changed a bit but the then fan favorite Unlimited Class is still the fan favorite. That is what the fans want to see, 3000+ horsepower pulling a WWII fighter at 500 mph just 50 feet off the ground.

The other classes like Formula 1, Biplane, T-6 have been around for a long time. The Sport and Jet classes have been added in the last decade or so. All together you have a perfect air racing experience for the fans. Now through in some top notch aerobatic pilots, a military demo and a military demo team like the Thunderbirds or Blue Angles and you now have an unbelievable week of racing and airshow entertainment so good that when Sunday at 5pm comes and the races are over, you are screaming for more. Don't worry, just 51 more weeks to go.

Noticeably missing this year was the military presence. Enough said.

2013 turned out to be a truly great year of racing with top unlimiteds like Strega, Rare Bear, Voodoo, September Fury, Czech Mate, Dreadnought and Precious Metal returning, healthy and hungry for a 1st Place Finish. Four of them being returning Champions. Rare Bear went through major work to the induction system, Czech Mate got a new wing and other improvements, and Precious Metal received numerous mods including a new racing Rolls Royce Griffon engine ... which spun a being on the initial run up!

While most race teams keep quiet about their mods during the off season, Precious Metal owner Thom Richards was very open about what they were doing, including photos. They quickly emerged as the fan favorite after a huge year in 2012. The Griffon never sounded so good and PM never raced as fast as it did in 2012.

Meanwhile, quietly working on another bid for a championship, Bob Button kept Bill Kerchenfaut as Voodoo's crew chief and they were making improvements in performance and consistency each year. This year they also added new crew member/pilot, Steven Hinton. Yes, the very same Steven Hinton that piloted Strega to 1st Place the last three years. So what about Strega? Early rumors was that it would not be racing, but Tiger is good at rumors. Matt Jackson later struck a deal with Tiger to be the 2013 pilot. The shootout has begun. But, what kind of shootout would it be? Voodoo has not finished a Gold Race in ... can't remember. They had a good chance in 2010, but the Gold race was canceled due to high winds. Team Voodoo has some proving to do. The got a fast P-51, they got a (the) top-notch crew chief, they got a top-notch crew and now they have a proven winning pilot. Nothing left to do but get out there and race.

Drama, you want drama? This year it is called Rare Bear. After team owner Rod Lewis let the old crew go and brought in a new team, there was less than a sportsman-like turnover. The old crew was full of talent and knew the airplane's ins and outs, but could never get it to come together for a win. Lewis thought it was time for a change. The Bear was trucked to Texas via flatbed, and the new crew made some modifications to the induction system among other things. The Bear was flight tested in Texas, broke down and trucked back to Reno for the races. They worked hard fighting carburetor issues all week. The Bear never came up to full power.

Congratulations to the hard work and persistence of Bob Button and Team Voodoo. The pilot? Well, Steven Hinton now has 4 Unlimited Championships! Congratulations!

What will next year bring? Precious Metal is bound to get even more precious. Thom Richards does not sit around idle. Rare Bear will be back and hungrier than ever. Team Voodoo and Steven Hinton say they are coming back. Strega? Don't know at this point, but never count Tiger out. Hoot Gibson flew September Fury faster than it has every ran before. Hopefully they will be back with a new race motor. Czech Mate ran great and finished 3rd, congrats to Sherman Smoot and crew. The Sander's Sea Furies are stable racers with Dreadnought just hanging around at 450 waiting for others to drop out.