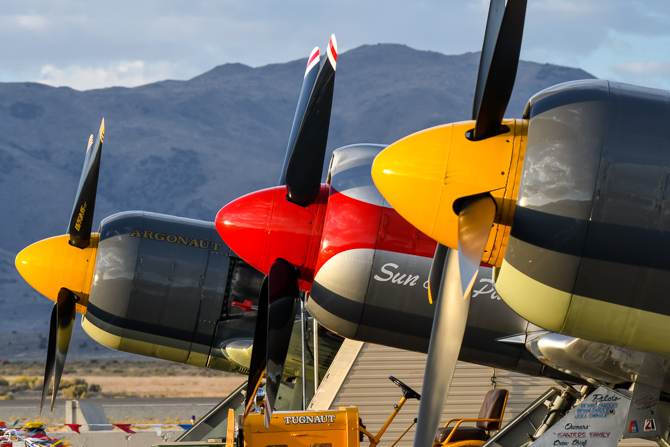 Have to admit, there was not too much pre-race excitement this year. Last year's winner, #7 Strega, took the year off. Rod Lewis, who has brought as many as 3 racers, also took the year off. The unlimited #s are way down. If is wasn't for the CAF, who brought some non-racing warbirds, Lady Alice P-51 and Bill Allmon's NACA P-51, the pits would have several completely empty rows. As it was, what used to take a long time to stroll through the unlimited ranks in the pits, now only takes a few minutes. Still (or for this year's sponsor Stihl), there is no other place to see unlimited aircraft race - none! Even though numbers are down, die hard race fans will travel the globe to experience unlimited air racing at Reno.

If #5 Voodoo stays healthy, there are no other unlimited that can keep up. Steven Hinton set the pace in qualifying at 475 mph. Much slower than Voodoo is capable of, but top speeds were not needed this week. New racing jock James Consalvi flew the fastest Yak Czech Mate to a 2nd place finish at 444 mph and proved to be a good race pilot. Thankfully, the Sanders clan still bring their 3 unlimited racers to Reno each year. Their fastest racer, Dreadnought, reached the podium once again in 3rd place at 440 mph. The Centaraus-powered Seafury #924 is so cool to have at Reno. That sound! The race week for the unlimiteds was very uneventful and safe - not to take away from Steven Hinton, who now has 7 Unlimited Gold Champion Titles!. Team Voodoo is making their mark as one of the fastest P-51s in history. The only mayday during the week for the unlimiteds was #8 Dreadnought early in the week, but was able to taxi back under power.