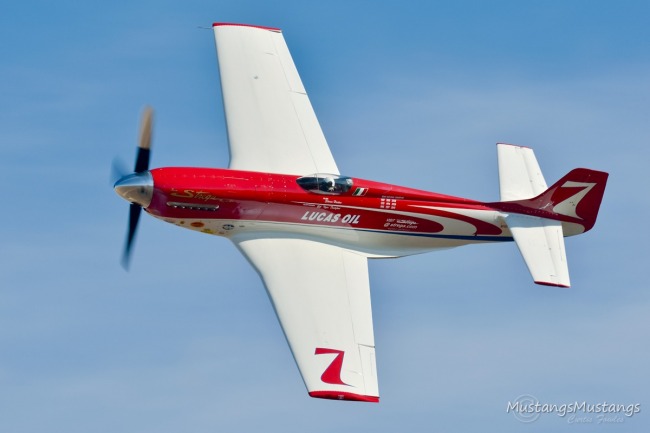 1945: Jul 4, RAAF A68-679
1948: Dec 22, approved for disposal
1966: recovered from farm put on display
1980: Dave Zeuschel, shipped to USA and rebuilt as racer
1983: N71FT, Bill "Tiger" Destefani Bakersfield CA, "Strega" #7
1997: After winning unlimited gold race at Reno, suffered a hard landing, shipped back home for repairs
1998: Full rebuild
1999: Flying again, appeared at Reno, DNF Gold race on Sunday- mech. problem
2002: raced in gold but DNF lap 1 with engine problems, has not raced since.
2003: did not enter races.
2004: did not enter races.
2005: Strega is back, but Tiger is not the pilot this time. Curt Brown will be tucked inside the streamlined racer. Team Strega had troubles with both of their race engines and did not compete.
2006: Tiger is back! Tiger raced Strega but battled various problems during the week. Was 2nd during the Gold Final a few seconds behind Michael Brown in "September Fury", when he called a mayday with engine trouble.
2007: Tiger will race, but with a stockish? Merlin V-12.
Well, that's what Tiger said! Not stock but not full race motor. Tiger qualified in the 450 range but battled ignition problems throughout the week and did not race on Sunday. Hope to see him in 2008!
2008: The buzz is around Strega, but the buzz is not about Tiger, but the young man he trusts to fly Strega. Young, 20 years old Steve Hinton has been chosen as the next generation pilot of Strega. Steve "Stevo" Hinton qualified at Reno in June 2008 at Pylon Racing School. I was able to watch young Hinton fly the course from pylons 3 and 4 and I can tell you that he is doing a super job flying. He flew the instructor's wing when told to, passed when told to and when they cut him loose, he flew a great line around the course. Just when he was getting comfy down low, they called a practice mayday for him. He handled it very well. It was fun to watch!

Tiger says that this will be a transition. Steve does not keep the keys in his pocket yet, but it says something that a man like Tiger would trust a 20 year-old in his baby. Steve is a very gracious young man and is well aware of the opportunity that he has. I am looking forward to seeing him fly some more.

2008: Reno Air Races - Tiger qualifies and hangs back in 3rd or 4th watching and sizing the other racers up. He had plenty of Merlin power and was holding back for Sunday. On Sunday, he let loose with plenty of boost and passed Brown on the pace lap, then took sights on Dan Martin piloting Dago Red in first. Strega had too much power and passed Dago Red and went on to win Reno 2008. Congrats to Tiger Destefani, L.D. and the Strega Crew. What a great week of racing.
2009: March - Strega is apart and getting some work/mods done. Steve Hinton Jr. will qualify Strega at Reno in September. Tiger will also qualify Strega and be the "back-up" pilot.
2009: Reno Air Races - Team Strega has everything dialed in and working smoothly. Steve Hinton Jr. wins as the youngest unlimited pilot, breaking his father's record.
2010: Reno Air Races - Again Team Strega is on top of their game. Qualifying fast, flying fast and keeping the pole.
Steve Hinton Jr. wins a very anti-climatic Sunday Gold race that never happened. Strong winds came up and after some scary moments during the afternoon Sport race, RARA and the pilots decide to call it off.
2011: Reno Air Races - Strega qualified 1st - Cancelled on Friday after the Jimmy Leeward Crash
2012: Reno Air Races - Strega / Steven Hinton - 1st qualifier - 1st all week - Great performance
2014: Reno Air Races - THE RACE - Saturday, Tiger is DQ but passes Voodoo as he crosses the finish line! Also, burns up Merlin in process. What a race!
2013: Reno Air Races - Strega / Matt Jackson - did not qualify because of broken canopy coming down the chute on Tuesday. Won Friday Bronze Heat, but was DQed for Deadline cut. Won Saturday Bronze bumping them to the back of the Sunday Gold Championship. Coming from last, Jackson passed the field but could not catch Voodoo who won 7+ seconds ahead. Strega took 2nd.
2013: Oct - Strega put up for sale or sponsor - what is the future of this Champion?
2015: Reno Air Races, Robert Hoot Gibson - WINNER!
-------------------------
2017: Sep 17, Winner! Reno Air Race Unlimited Gold Champion! Congrats to Tiger, pilot Jay Consalvi and the Strega crew for an incredible air race week. The best Unlimited race ever. 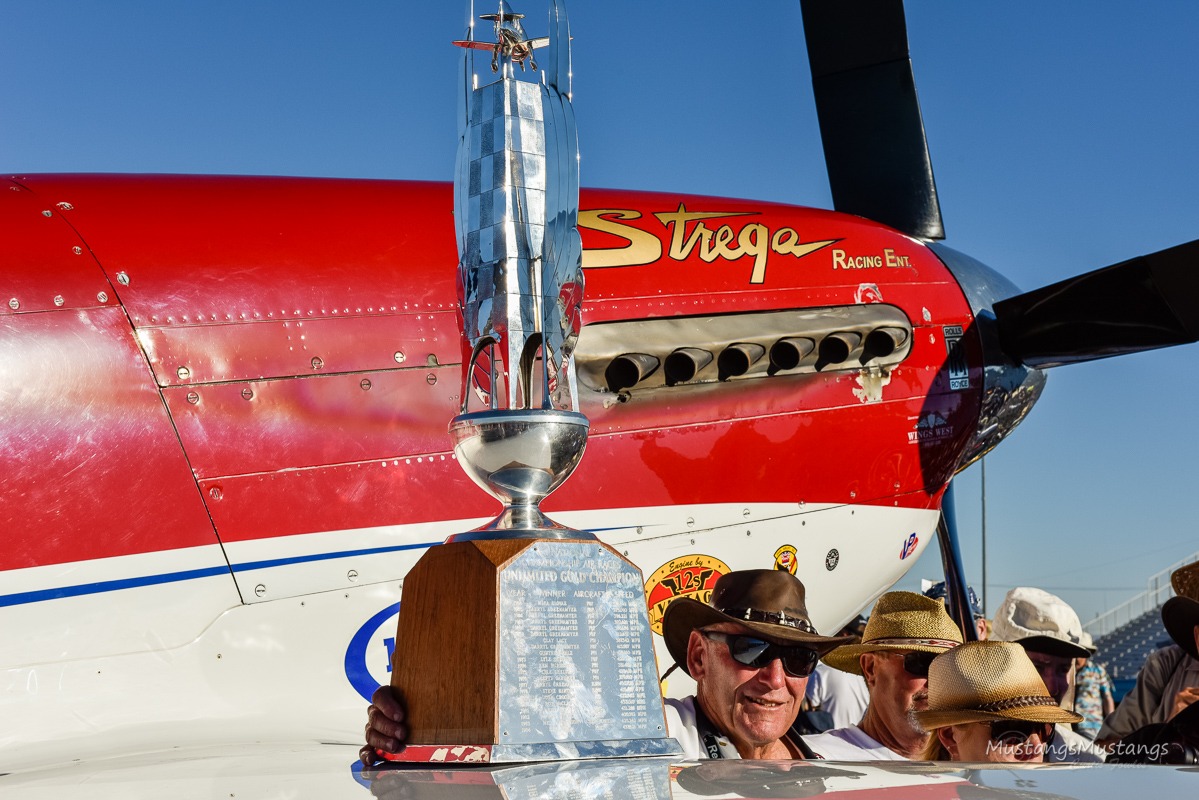