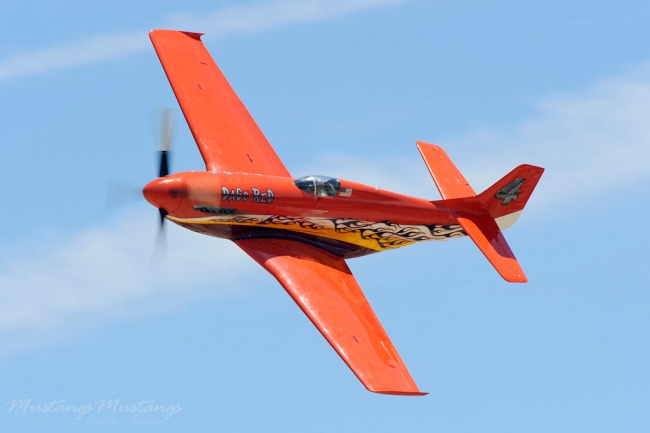 2006: Reno - Dan Martin (Ridge Runner III owner/pilot) and Dan's crew borrowed Dago Red for a few months. Dan put his race motor (Sparrow Merlin) into Dago Red and worked out a few bugs with the airframe. The merlin ran well, but an ADI check-valve failed and the engine overheated very quickly during qualifying. Before Dan got the racer down, the engine blew a hole in itself and spewed oil down the sides of Dago Red. Dan landed safely but the merlin was done. The 2nd race motor was producing too much metal after a Wed. night test run. Dago Red was out of the races.

2008: Reno - May - Excitement builds as Ryan and Greg Costo form Dream Machines LLC and purchase Dago Red from Terry Bland. Dan Martin is secured as the pilot and work continues on with a Sparrow Race Merlin. Dan practiced at PRS in June and is looking forward to September.

2008: Sep 15, Reno Air Races:
Dan Martin qualifies at the top of the list on Monday. He loses a spot to Mike Brown on Friday when the rudder trim broke lose causing Martin to slow down and access the problem before resuming race speed. Martin takes it back on Saturday and holds the pole position for the Gold Final on Sunday. In an exciting race, Tiger Destefani in #7 Strega passes three top racers to get into first place and holds off the field. Dan Martin in Dago Red holds onto 2nd place and Team Dago Red finish the week strong.

2009: May, Gasp! Dago Red is (rep.) SOLD! to past owner, Frank Taylor (Frank Taylor does not appear on any FAA paperwork since his ownership in the 80's or on Dago Red LLC), but Taylor is in charge of the delivery to Chino and the work to follow.