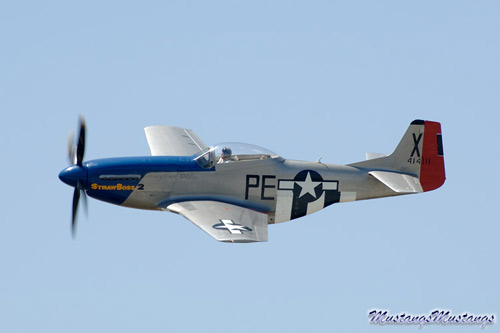 The P-51B and P-51C were excellent aircraft that served until the end of the war. The shortcomings of the B/C models were well-known and evolved into a new model of P-51, the P-51D. The B and C models suffered poor rearward visibility and gun jamming during high-G manuevers. The B/C models only had four .50 cal Brownings (2 in each wing). Pilots wanted more fire power. NAA also took the oportunity to make other improvements to the new line.

The new line, designated NA-109, P-51D, was started after the USAAF ordered 2,500 in July 1943. Interesting is that the XP-51D did not have a test flight until November 17, 1943, well after the first order was placed. Deliveries to fighter units began March of 1944 and a good supply was on hand for the Normandy Invasion, or D-Day.

The signature change in the P-51D line was the new bubble canopy. The U.S. was behind the Brittish in canopy development. A Brittish company had designed and built the "Malcolm Hood" which improved visibility to the rear of the P-51B/C models. The U.S. was not unaware of the advantages of a bubble canopy design. NAA had built a wooden model of the P-51 with a bubble canopy for wind tunnel testing. The technology to build large curves of plexiglass "distortion free" at that time was being invented and developed.

The Brittish had figured out how to make a bubble (also called "teardrop") canopy with unobstructed 360 degree view and they were beginning to use them on the latest model of Spitfires and Typhoons. The U.S. Army sent Col. Mark Bradley to England in January of 1943 to find out the workings of this new canopy and then find a way to get them on U.S. fighters. Bradley returned and began to pursue ways to incorporate the new style. The first U.S. fighter so tested was a Republic P-47.

NAA pulled P-51B-1NA 43-12102 from the production line for modifications. To my knowledge, the only D model modification made was the new experimental bubble canopy and the razorback of the B model had to be cut down and modified to fit the new canopy. 43-12102 was test flown by Bob Chilton and results were a big thumbs up. Some refer to this aircraft as an XP-51D but this does not appear to be an official designation for this P-51. If you study the pics of this Mustang, you will not see any of the other D model mods. It retains a B model wing and does not have a fuselage fuel tank. This aircraft continued to be used for testing.

The wing of the new D model had to be reworked to fit three (in each wing) .50 cal Brownings upright. The arrangment of the ammo chutes eliminated the jamming problem on the B/C models. The inner gun carried 400 rounds and the two outer guns had 280 rounds each. The gear operation was also changed and this lead to a larger "kink" in the leading edge of the wing at the wing root. The aileron effectiveness and strength were both improved. A seal was added to the leading edge of the aileron which helped ease stick pressure during tough manuevers. The landing light was moved from the wing leading edge to inside the gear well. With the gear extended the light would hinge downward.

The cut-down back for the new bubble canopy lead to a loss of surface area. This caused the P-51D to have directional problems (especially with full fuel in the fuselage tank creating an aft CG) for all but the most proficient pilots. The solution was to add a fillet (often called the "dorsal fin") to the vertical stabilizer that extended down and towards the front. The fillet was also added to other P-51 models already in the field.

The dorsal fin was added during the P-51D-10NA and later versions at the factory. Many other P-51s received this mod in the field. Look on this page, there is a wartime pic of a -5 model with the dorsal fin. Metal elevators were added in February 1945. The P-51D continued to have a fabric rudder. The -25 blocks and later were fitted with attachment points for various forms of rockets and rocket launchers.

One of the most important improvements to the P-51 was not structural. The K-14 gun sight was introduced in October of 1944 to the -20NA and later blocks. This new gun sight helped the pilots score more hits especially in higher deflection angle attacks. The K-14 utilized an analog computer. The pilot had to dial in the wingspan of the enemy aircraft and the range. Then all he had to do (sounds easy) was to put the enemy aircraft in the gun sight and pull the trigger.

Conversions to the D models included recon P-51s taken from both the Inglewood and Dallas plants and designated F-6D. Several units were converted including 31 F6D-20NT, 70 F6D-25NT and 35 F6D-30NT. The F-6 had cameras mounted in the rear fuselage, one facing to the pilot's left and slightly forward and a camera facing downward out of the bottom of the fuselage. Most F-6s retained their armament.

A two-seat version was created and designated TP-51. The fuselage tank was omitted and the radios were relocated. There was a rear seat added with full dual-controls. The standard canopy was used in the TP-51. The most famous flight of General Eisenhower soon after the Normandy Invasion was in the back of a TP-51.

Considered by many as the definitive P-51, the P-51D was the most produced Mustang with 8,102 units built. It is also the most survived of the models with many still flying today.