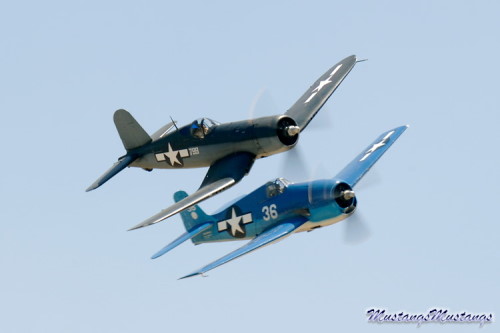 US Navy
story and photography by Curtis Fowles

World War II and the US Navy. At the Planes of Fame Airshow, the US Navy of WWII was represented by several different models. The attack aircraft like the Douglas SBD-5 Dauntless and the Grumman TBM Avenger were on hand and flew. The Dauntless was the dive bomber and the Avenger was the torpedo bomber during the war. Between the two of them, they sunk many ships. The fighters for the US Navy at the show were the F4U Corsair, F7F Tigercat (actually a US Marines close support), F8F Bearcat (2) and the F6F Hellcat (2).

The Tigercat and the Bearcat came late in WWII and did not see action. The frontal shot of a Tigercat is impressive as all you see is engine.

The Navy Legacy Flight was the F-18 Super Hornet and two F8F Bearcats.