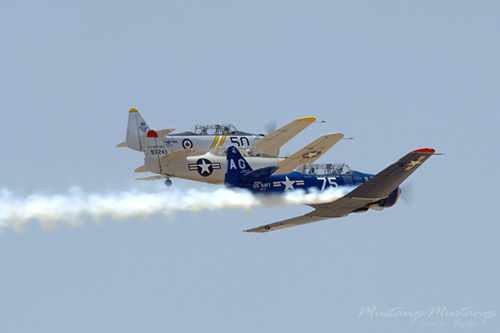 Warbirds in Action 2008
story and photos by Curtis Fowles

At the southern end of the San Joaquin Valley between Highway 99 and Interstate 5 is Shafter Ca. Shafter is a town of about 15,000 residents surrounded by farm lands which lies at the intersection of the Lerdo Highway and Highway 43. The airport is off the Lerdo Highway east of town only a couple miles from Highway 99. Bakersfield, Ca is about 19 miles to the southeast of Shafter.

With such a rich history, Minter Field is a deserved location for an airshow - especially an airshow filled with warbirds. Minter served up a respectable line-up this year with several BT-13s. Also showing in numbers was another WWII trainer the AT-6. Warbird fighters like the P-51, Hellcat, Corsair, Sea Fury and a Zero were all on hand and flying displays.

Two B-25 bombers were at the show and performed a series of low-level bomb runs for the crowd. There was a nice show line of aircraft to look at including an A-26 and a C-53 troop carrier. An antique car club was on hand as was the local Sheriff's and Army Helicopter Units.

The airshow was not a full-blown show with 5 aerobatics acts, military displays or Heritage Flights. There was one aerobatic act (Rob Harrison), a hang glider (Dan Buchanan), an antique car parade, a sky diving act, the 4-ship L-29 fly-bys and several passes including BT-13s, AT-6s, P-51s, Sea Fury, Hellcat, Zero, Corsair, the B-25s. Then Tiger Destafani tore up the field in his highly modified P-51 Mustang racer "Strega" to finish off the day.

Friday (arrival day) was beautiful with temps in the 70's, low wind and sunshine. Saturday started off way wrong for California. It was very windy early and cold. Cold for us California natives means that we have to put on a light jacket :) But at least the sun was out. The wind kicked up plenty of dust and dirt. I saw more than one sun umbrella get loose.

As the day went on the temps rose enough to get rid of the jacket and the winds died a bit and brought the windsock back to half or so. For you photogs, the runway in use for all the fly-by action is 35/17. The sun is good early and moves to in your face late in the day.

All in all, a very nice show to attend. You don't have to fight huge crowds and there is a small-town atmosphere to the show. Check out the new hats from the Warlock Pits and say hi. Al, Randy Goss and crew are some very nice people to meet and talk to.