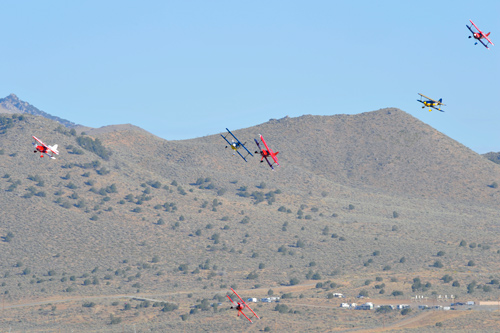 The Formula 1 class of air racing must be powered by the O-200 Continental and the aircraft must weigh at least 500 pounds empty, have a min 66 sqft. of wing, fixed gear and fixed pitch prop. They do come in many shapes and sizes and reach speeds over 240 mph! That is from the same engine that powers the C-150. The Cassutt is a popular choice, but the winner this year (and others) is a custom build Arnold AR-6 by David Hoover from Northern California. Hoover won in 2007 and recorded speeds up to 254 mph. Now owned by pilot Steve Senegal, Endeavor won in 2008 with Senegal as pilot at 246 mph and again this year at 253 mph. Last years winner "Invictus" finished 2nd on Saturday but did finish the race on Sunday.

Here a some highlights of the rules that apply to the biplane aircraft in the Biplane class. Engine can be no larger than a Lycoming O-360, not turbo or super charged, fixed gear and prop, lower wing must be 50% or more of total wing area. The O-360 can have some modifications but they are limited by the rules committe. So how do you get a Pitts Special to go over 200 mph? Fine tuned engine, custom engin cowls, low drag intake, exhaust and gear, fixed ailerons on one wing and super-mini tail wheels are some of mods done.

The runnaway favorite for next year can only by Tom Aberle in his modified Mong Sport named Phantom. Aberle won at 250 mph this year, with the nearest competitor at 209 mph! A ton of Pitts Specials rounded out the Gold Final. The class is dominated in numbers by the Pitts Special.