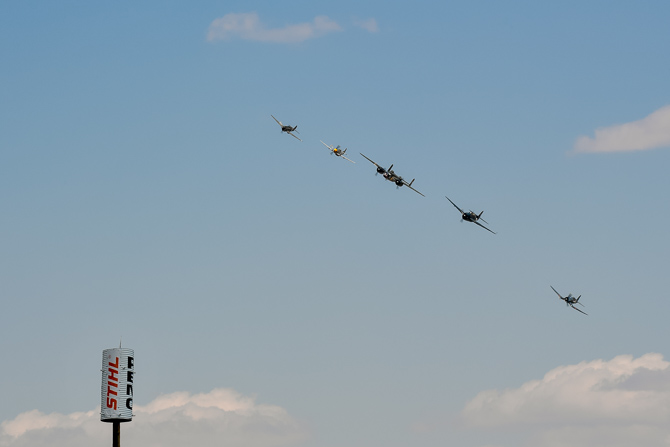 Fans travel from around the world to be in Reno Nevada for the 2nd week in September each year to witness this once a year gathering of heavy metal of all types. Race teams shave pounds, squeeze horsepower from places you and I would not even consider, to do one thing. Win. Be the fastest in the world.

This race week will go down as one of the best head to head battles between two the fastest unlimited racers ever, #7 Strega and #5 Voodoo. Saturday's race, with that incredible sound as Strega and Voodoo come ripping around pylon 8 and 9 was incredible and surely could not be topped. But it was topped in the Stihl Gold Championship final race on Sunday as those two traded places twice during the 62.8 miles of piston engine bliss.

One of great surprises this year was the addition of the Texas Flying Legends. They put on an awesome warbirds show and brought many cool warbirds to the show. You could walk right up to and talk to the pilots and crew. Each day they performed as a 5-ship formation, pairs and solos. They raced some of them too! It was great to have a Spitfire, P-40, P-51, Wildcat, and Corsair in the lineup - sometimes in the same race!

Many teams work year round to design, build and test new mods, new aircraft and new pilots. You can be the fastest of all time, the fastest all week, but if you don't cross that checkered flag on Sunday afternoon first ... well, you are not the fastest. That final race will deliver up another champion, for another year. Bragging rights, broken records, that coveted trophy.

The losers, who have worked just as hard as the winner, will go home to try again next year, thankful for having a next year. Yes, it's a dangerous sport. Things can go sideways in a flash. These engines and airframes are pushed farther and farther each year, stressed to the limits. So are the crews. So are the pilots. If any part of the machine-crew-pilot bond fails, disaster can strike, leaving a wake that we have seen and hope to never see again.

Sit back and enjoy the images. Get your plans set in stone for 2018. You have to be in Reno to know why you need to be in Reno for the one and only Reno National Championship Air Races.

Another incredible year of air racing in the books! Don't delay, get your plans set. Be here next year, Sep 12-16, 2018 for the Reno National Championship Air Races.