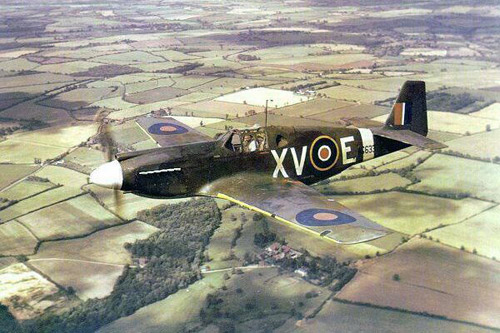 Let us not forget that because of the Brittish, North American Aviation entered the fighter building business. NAA was agressive and optimistic and was able to jump into that business with their own design. Therefore the first orders placed at NAA were from the Brittish for 320 Mustang Is.

The first batch of Mustang Is were NA-73, same as the XP-51 using the original powerplant, the Allison V-1710-39. NAA kept the first production aircraft, AG345, for testing and squawk fixing. The RAF received the first Mustang Is in October, 1941, considerably behind schedule. To make matters worse, 20 aircraft were lost at sea when the boats transporting them sank. When Brittan perfomed tests on the Mustang I, they were very enthused with the performance. Faster than the Spitfire by about 30 mph and had more than double the range.

AG348 was the last Mustang with the short nose intake. There were problems with induction during high-angles of attack. NAA extended the nose intake right up to the spinner. AG348 also was the end of any hand-tooled parts. The production line was in business.

Back in December of 1940, the RAF had added to their initial order with another 300 aircraft. Still called Mustang I, the new NAA designation was NA-83. Improvements can only be found in the exhaust stacks design. The new stacks were flared from top to bottom versus the more streamlined initial version.

March of 1941, the US Congress passed the Lend/Lease Act which permitted the "lending" of US built aircraft to nations that were "vital to the security of the United States". This allowed the US to place an order for 150 more Mustangs to be sent to Brittan. This allocation was NA-91, RAF designation of Mustang Ia. The Mustang Ia was equipped with four Hispano 20mm cannons installed in the wings. The nose guns were deleted. Out of the 150 ordered, only 111 were serialed for the RAF and probably less than that actually received.

After the attack of Pearl Harbor, the US Army held the remaining Lend/Lease order of NA-91s to Brittan. These, about 55, were designated P-51 and were fitted with four .50 cal guns instead of the cannons. But not all were configured with the Brownings. Cameras were added and a new designation of F-6A. The US Army actually called the NA-91s "Apache".

Since the Brittish were shorted on the last order, 50 NA-99s were designated Mustang II. The new Allison had an improved supercharger significantly increasing mid-altitude performance. The Mustang II had a top speed of 412 mph at 10,000 feet. This was the fastest mid-altitude fighter of the time. The full order of NA-99 was cut short for the beginning of the P-51B/C models.

Mustangs IIs were taken from the P-51A line so the specs are the same.

The Mustang III and P-51B/C were the end of the Allison V-12s. Rolls Royce had obtained five Mustang Is for retrofit of a Merlin V-12 in June 1942. As you know, this was a perfect match and ended the production of the Allison Mustangs. NAA was also working on a retrofit with the Packard built Merlin 61 V-12. Orders were rushed and Brittan received almost 900 Mustang IIIs.

Field modifications included the addition of the Malcolm Hood. This was a bubble canopy that was fitted in the section above the pilot's head on the B/C models and the Mustang III. This improved visibility considerably. The canopy was on rails and not hinged like before, so it also made getting out easier. A new merlin, the V1650-7 model was added to the production line increasing the horsepower by another 50.

The four .50 cal guns had a problem with jamming during high G manuevers. The guns were mounted on a slight angle to fit inside the slender wing. This would be fixed in later versions and a field mod was approved. With these mods, the Mustang IIIs and the B/C models were considered the best of the war. The razor back design was strong and fast. The RAF found that if they tweaked the Merlin a bit, they could get about 417 mph at 2,000 feet. This would become a very good platform for chasing the German V-1 flying bombs. Both the Mustang IIs and IIIs would be used until the end of the war. Specifications for the Mustang IIs are very similar to the P-51B/C models.

The drawbacks of the Mustang IIIs were few but they were addressed. The Malcolm Hood helped visibility, but checking your six was still not easy. The other complaint was only four .50 guns. The P-47 had eight. NAA modified a P-51B, 43-12102 with a cut down back and a true bubble canopy. Bob Chilton tested it and two other P-51Bs were taken for full modifications to the next designation NA-109.

Orders came in and the RAF was sent nearly 900 of these new Mustangs. The P-51D version was called the Mustang IV and the P-51K version was the Mustang IVa. The RAF received 284 and 594 respectively. They had the visibility and the firepower that the pilots needed. The first RAF serial was KH641 and the last TK589.

A very welcome addition was the K-14 gunsight during the early blocks of production. This helped the pilots score more kills with less ammunition. Interesting is that with the Lend/Lease Act, the Mustangs were returned to their maker after the war albiet a little worn. Specs for the Mustang IV and IVa are the same as the P-51D and P-51K.