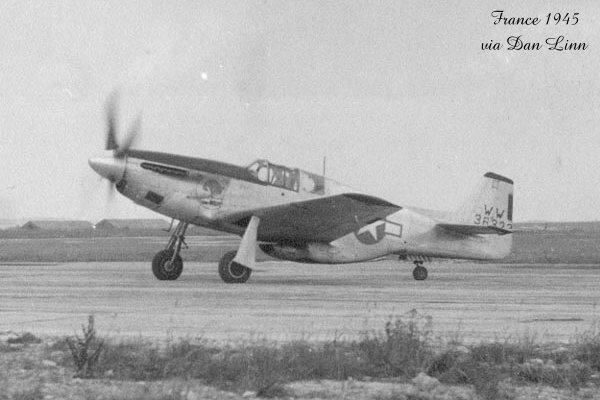 The 354th Fighter Group had a similar "war weary" B model that they converted to have a jump seat and, in early July '44, Pete Quesada flew General Eisenhower around over the Cherbourg area in the airplane...which had been named "Stars Looking Down" since, between the two occupants, there were 7 stars.

Could it be that your Case 161 airplane was such a conversion and was used as a squadron/group/wing "hack"? If that's the case, then one of the real historians who has good knowledge of the individual squadron/group/wihg histories ought to be able to come up with an i.d. on this one.

Really interesting picture.
Keith Rinehart
I found this info on a serial numbers list. I'm not sure if this is the same plane because there is one digit in the serial number that doesn't match the one on the tail. The story seems to fit this aircraft though, so I thought I'd send it to you. 43-6623 accidently dropped into water while being unloaded. Declared unfit for combat, sent to USAF Base Air Depot 2 (Now RAF Warton) where it was combined with other aircrafts' parts and rebuilt as a two seater named *Spare Parts*. Scrapped summer of 1945.
Mike Denton
I did find this on an accident report website
Date 460410
Aircraft Type P-51B-5NA
Serial Number 43-6323
Sqdn Group 42ADG
Home Base AF AFE
Action LAC (Landing Accident)D 3
Pilot Mc Avoy, Walter J
Country GER (Germany)
US State Location Ansbach AD
If that makes sense to anyone, the website is http://www.aviationarchaeology.com/src/1940sLate/1946Apr.htm this could help track down this aircraft
Nick
See: http://web.ukonline.co.uk/lait/site/P-51%2043-6623.htm
Steven Peuster
I have a photo of this plane, in flight, in amongst many items, I inherited from my father. He was a mechanic at Air Deopt 2, '43-'44. The story, he related to me, was that they peiced it together, from several "war wearied" P-51s. It was then used, primarily, as a hack, for the base C.O. Sorry, but I don't remember what he said the C.O.'s name was. He had a pretty extensive collection of photos, of many, mostly B-24s, that he worked on. My favorites are the "Zodiac Group"!