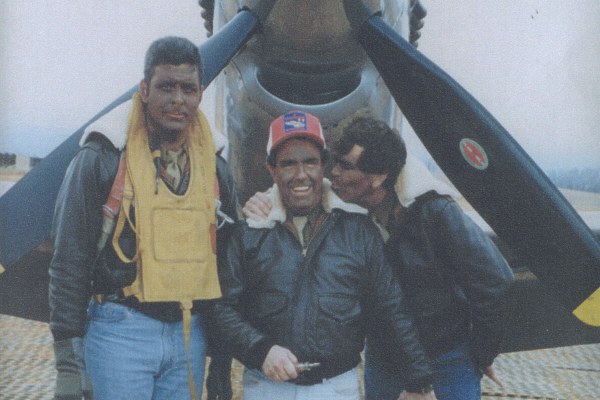 << Case # 166
Who?   Case # 167
Case # 168 >>
P-51 Who? Viewer Responses
MustangsMustangs
A very interesting photo indeed. We at MustangsMustangs are very serious about our mustangs but I'm sorry, it took me 2 hours to stop laughing when I saw this photo. Something is not right! So, we want to help solve this strange one.

While brainstorming, we came up with a few suggestions to help you out.

1) Ok, these guys (I think they're guys) obviously had too much to drink. Probably came stumbling onto the flight line from the local bar. But that does not explain the tall goofy looking guy with the Mae West and the funny gloves. If you were going drinking, would you take this guy along? I didn't think so.

And what about the 2 on the right? I hope they are not sharing a bunk.

2) Next thought is this: remember the Jackson Five and the Osmond Brothers? Maybe this is like the 3 Stooges, (my favorite trio) only they call themselves the Brothers Stooges. Certainly Brother Moe is on our left, Brother Larry is on our right ... that leaves Brother Curly in the middle. I know, that's a long shot. Why is Brother Curly threatening Brother Larry with a zues driver?

3) All right, these guys are actually caucasian mustang pilots who went high-altitude flying without oxygen. That explains the silly looks on their faces and the fact that they thought they could get better air by rolling back the canopy and sticking their heads out the side. And most of you know where the merlin exhaust is located... perhaps that expains the blackened faces with the white hands.

4) Sorry, we thought that maybe these pilots (they have pilot-type jackets, so it's a good bet they fly) were only so-so WWII P-51 Pilots. They weren't doing all that great in their Fighter Group, while the 332nd of the 15th AF was doing a superb job. Well, they wanted a piece of the action. When they found out that the 332nd was comprised of only black pilots, the tall guy, with the white stripe on his forehead, had a great idea. He convinced his buddies that they should become black so they can be part of the famous 332nd. Needless to say, it failed. Their make-up skills were as good as their flying.

5) Last ditch explanation: Steve Seghetti paid me a huge sum to put this up.

All kidding aside ... who are these guys?
Dick Phillips
Not sure who the tall guy is, but the middle one is Dan Martin and the kisser is Jimmy Leeward. They were filming Tuskegee Airmen.
Larry Oliver
Ok, I know who two of the guys are, but I can't identify the tall one. The guy on the far right is Jimmy Leeward, who owns Cloud Dancer. That might be Cloud Dancer in the back, I can't tell. The guy in the middle is Dan Martin who owns Ridge Runner III, If you look at his hat, you can see the ridge runner logo. I don't know who the tall guy is.
Chris Luvara
I remember seeing another pic like this in Dan's hangar... But on the right it looks like it's Jimmy Leeward, middle is Dan Martin, and on the left I think is Art Vance. It's from the filming of the HBO movie Tuskegee Airmen.
Harry McNulty
Hee Hee, I recognize Dan Vance, Dan Martin and Jimmy Leeward, I suspect they were clowning around a bit during the filming of the "Tuskegee Airman"
Eric Martin
From left to right ..Dan Vance, Dan Martin, and Jimmy Leeward who did all of the flying in The Tuskegee Airmen Movie for HBO..
Bret Haley
I'm not sure about the man on the left, but Curly is none other than good ol Dan Martin.
Ryan
this is way to easy. thats Dan Vance,Dan Martin and Jimmy leeward.During the filming of the tuskeege movie for HBO. It it to funny. Does DAN MARTIN know you put this up?
MustangsMustangs
Well, I don't know Ryan. I suspect I'll find out next time he buzzes my hangar. If he drops something on me, that means he knows and does not like it.
Sedric Moore
Answer to your question is- Steve Seghetti, Dan Martin, I believe Jimmy Leeward from the movie shoot The Tuskegee Airmen in 1995.
J K Foster
Looks to me like Dan Vance on the left during HBO's making of Tuskeege airmen.
MustangsMustangs
WOW! A new P-51 Who Record!
Lots of email on this unique picture. But I haven't heard from any of the three in the photo. That's probably a good thing!
MustangsMustangs
Well, that was way too much fun! Yes it was taken during the filming of the Tuskegee Airmen movie. And no, these guys are not just so-so pilots, they are excellent pilots who were ... (sorry I cannot explain what they were doing actually) ... but as Bill Hane wrote in, "Arkansas will never be the same after those guys".