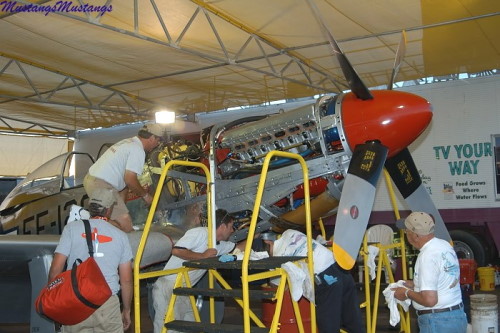 The Pits
story and photos by Curtis Fowles

If you want to see the unlimiteds up close and have a chance to chat with the pilot or crew for a brief moment, you must get that pit pass! They can be had behind the far west end of the grandstands next to the security gate. It is a popular place for fans and very busy for crews. They have to tow all aircraft out of the pits to the hot ramp for start-ups and tow them back to the pits after the flights. All the fans in the pit area are cooperative in getting the heck out of the way so the tug or truck that is towing this high performance warbird can see the wingtips and tail while dodging all the people (and other racers).

Access to the pit areas is not only for the unlimiteds, but for the t-6, sport class, jet class and the midgets and biplanes. The aircraft are roped off and it is a very helpful to the crews if you respect that space. Remember the fans are having a great time watching and drinking beer, the crews are working hard and .....

In the pit area you will notice some nice rides with full-sized truck trailers used for crew gear and supplies and shaded coverings for the aircraft and crew. On top of the truck trailer, many have a great seating area for crews and sponsors to watch the race from. On Wednesday, late afternoon, I was able to climb up one of those nice seating areas and get a good look at the crane lifting the sport class Nemisis out of the desert next to the runway. I guess earlier that day it had a little mishap on the runway.

Quite a few of the teams sell hats and shirts with their race logo on it. All are priced very reasonable. Try and support them if you have a few extra bucks left. I picked up a Ridge Runner III shirt and hat with their new design and also a nice RR Merlin shirt.

The pit areas can be a very busy place at night. This year 3 P-51s were busy during the night time on different days. Miss America worked late to solve a problem (prop related I believe) , Merlins Magic had to change an engine on Thurdsay night and Friday, Ridge Runner III also had to change an engine overnight (Saturday) to keep in the races. One of the Yaks was also busy in the pits more than once with the lights going. You can see one shot on this page where the Yak is doing a gear swing in the evening.

After the last racers land and taxi to the ramp race crews begin to put away and clean up the pit areas (if all went well). Some racers are still working on their aircraft and are able to go out to the ramp and do some test runs and even a test flight. The ramp is now open to all race aircraft for flights.

Racing warbirds and non-racing warbirds find the later afternoon and evening a great time to take passengers and sponsors up for a short hop or do some flight testing after working out problems in the pit area all day. P-51s, T-6s, F-80s, B-25s and even an F-15 find their way to the runway for a flight. Some T-6 formation work was done and a time to go have some fun. I have seen a private jet or two that come in drop off a vip. The airport is open to race traffic only. So you don't have a C-152 droning around the pattern with a Sea Fury.

Most of the racers do not fly after the races each day. But you can always count on some P-51s flying each day after 5pm. Ike Enns, Art Vance, Jimmy Leeward, Brant Seghetti and Dan Vance are some of those who like take a P-51 up after the racing is done - most with passengers in back. The Planes of Fame Spam Can (I don't know who was flying her) went up several times after hours.

The weather at this time of the day can be very nice and comfy to down right freezing. Most of the time, shorts and a light shirt are fine until the sun goes down. Hustle back to your car if you did not pack a fleece or sweatshirt.