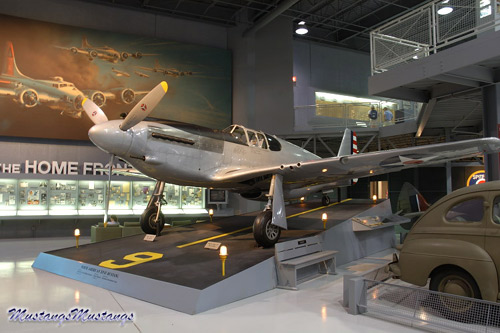 The Prototypes
by Curtis Fowles, MustangsMustangs

A condition of the approval of the sale of fighter aircraft from North American Aviation to the Brittish Government was to supply the US Army with two samples, free of charge, for evaluation. The two P-51s were designated XP-51, NA-73. They were the fourth and tenth production aircraft. One of them, 41-038, still exists today at the EAA Musuem in Oshkosh, WI. The Army was not in a big hurry to test the XP-51 seemingly bogged down in testing of other aircraft like the P-39, P-38 and P-47. Testing of the XP-51 began in October of 1941 with very high remarks. Still, the Army did not place immediate orders even though the performace of the XP-51 was clearly superior to other US fighters at that time. Top speed was measured at 382 mph at 13,000 feet.

The limitation of the Allison V-12 became very appearant over 15,000 feet and especially over 20,000. It was an excellent low-altitude performer. The Rolls Royce Merlins installed in the Brittish Spitfires and Huricanes performed beautifully at altitude. The two-stage supercharger kept pumping in induction air as the aircraft climbed. It was only a matter of time before this marriage took place.

On April 30, 1942 Rolls Royce senior test pilot Ron Harker was invited to fly the Mustang I. He was delighted with the aircraft's handling but felt its performance was held back by its engine. He stated that the Mustang would be a natural for the Merlin 61 series. Harker pressed the Defence Ministry to approve such a change. Permission was finally given and The Brittish, in June 1942, began the fitting of the Merlin 61 to a Mustang I. They used five Mustang Is (serials AM121, AM208, AL975, AM203, and AL963) and the first flew in October 1942 with a re-designation of Mustang X. None of these Mustang Xs were exactly the same. Engineers were trying different techniques and solutions to the new installation.

Meanwhile, the Americans had been interested in using the Packard Merlin in the Mustang and on July 25, 1942 the US authorized a similar conversion designated NA-101, XP-51B. Two ships, 41-37352 and 41-37421 were taken for the conversions. The XP-51B had to be strengthened for the added power and a new propeller by Hamilton Standard was designed.

The Merlin 61 V-12 with its two-stage compressor really cooked the air before it entered the carburetor. An intercooler had to be installed to cool the intake air. The Brittish installed the intercooler under the engine near the intake trunk of the Mustang X. The Americans put the intercooler in the doghouse assembly with the coolant radiator under the fuselage. This reduced the size of the cowlings around the new engine but increased the size of the belly scoop area.

The first flight by Bob Chilton was on November 30, 1942. NAA was very pleased with the results (might have been some jumping up and down with excitment). The new Mustang reached 441 mph at 29,000 plus feet. At this altitude, the XP-51B would simply run away from an Allison Mustang that was nearly 100 mph slower.

Orders for the new P-51B were placed in August of 1942, months before the test flights. P-51A production was cut short to make room for the new Merlin powered Mustangs. During this time period Packard was working with Rolls Royce to build their Merlin series V-12s in the U.S. The negotiations were successful and Packard began the produce V-1650-3 Merlins for the new P-51B.

The B/C model was very streamlined but offered little in rearward visibility. A Brittish company invented and constructed the "Malcolm Hood" which was used extensively on the Spitfire and retrofitted to the P-51B and P-51C. This helped considerably but the Army was in search of a more long-term solution. In January 1943, the U.S. Army sent a Colonel, Col. Mark Bradley, to England because the Brittish had a newly invented "bubble" canopy they were using on late model Spitfires and Typhoons. He was to evaluate the new canopy and its possibilities with U.S fighters.

NAA also incorporated other changes into the XP-51D. They fixed the gun jamming problem of the B/C series by installing the guns upright. They also added another .50 cal to each wing for a total of six. The wing was modified for the gun installation and a differing gear geometry and the famous leading edge kink near the wing root was enhanced. From photos, it looks like P-51B 43-12102 did not get this wing change or the gun change. The P-51D was the most produced model of the Mustang and was built in Inglewood, Ca and Dallas Tx.

Fighters designed and built in the U.S. were under a different design specifications than the British aircraft and were heavier. Higher design loads equal more weight. Schmued and his team needed to shave some weight and gain more performance. The P-51 was amoungst the slowest in time to climb performance.

NA-105 was the designation for the lightweight fighters. A contract from the Air Force was approved in July of 1943. The contract consisted of three XP-51Fs, and two each of the XP-51G and XP-51J. These were new built aircraft not taken from previous allocations as nearly all the parts were not interchangeable with previous models.

Schmued visited England aircraft factories and the Rolls Royce factory to work out details of their new engine, the RM.14.SM which produced 2,200 HP. The new engine was met with enthusiasm from Schmued, but they would run into delivery problems later. Very promising was the idea of less weight and more horsepower.

The lightweights included refinements like a completely new thinner wing with a straight leading edge, smaller landing gear, less fuel in the wing tanks and deletion of the fuselage fuel tank. Big changes were made to the skins. A new skin material, thinner and stronger, was used. NAA could not find a supplier who could deliver material until the following year. So NAA figured out a way to make their own new alloy - a risky venture. There were problems mounting the thinner skins. Flush rivets were no good because the countersinking took out too much of the thinner skins. So a new dimpling process was incorporated with some trial and error.

(Different references give different speeds obtained by the lightweights. I am going to use speeds from the book "Mustang Designer - Edgar Schmued and the P-51". The speeds from this source are 20-30 mph more than given in other sources). Max speed was boosted to 491 mph at 21,500 feet with a ceiling of 42,100 feet. The XP-51F used the RR Merlin V-1650-3 and a 3-bladed hollow Aeroproducts prop. Armament was four .50 cal guns. In all, NAA stripped about 1600 pounds off the combat weight! The second XP-51F was tested in the U.S while the third was given an RAF serial of FR409 and shipped to Brittan for testing.

The XP-51G used a 5-bladed Rotol prop. This was installed because of a deal with the Brittish so NAA could get some of the new RR RM.14.SM engines. The new engine was down-rated from the intial of 2,200 to 1,190 horsepower. The 5-bladed prop was installed prior to the 5th test flight. The XP-51G clocked in at 492 mph at 20,700 feet, the fastest yet. The new Rotol prop was not very stable but the climb performance was very good: 3.85 minutes to 20,000 feet. The second XP-51G was shipped to Brittan with an RAF serial of FR410 for evaluation. THe XP-51G was essentially the XP-51F with the new engine and prop.

The testing of these lightweights led to a production aircraft, NA-126, the P-51H which began in April 1944. Soon after, the AAF ordered the testing of 2 XP-51J aircraft, still under NA-105, which were fitted with the new Allison V-1710-119. This Allison had a two-stage superchager like the merlin. Although the performance was promised to be similar with the XP-51F/G, there are some accounts that the J model Allison was never flight tested at full power. Rated HP was 1,500 considerably more than the first Allisons used. Reports say that the new Allison had problems and was not liked by Schmued or Bob Chilton, NAA's test pilot. The XP-51J was turned over the USAAF on Feb 15, 1946. It was later used as a testbed for the Allison V-1710-143 used in the P-82 Twin Mustang.