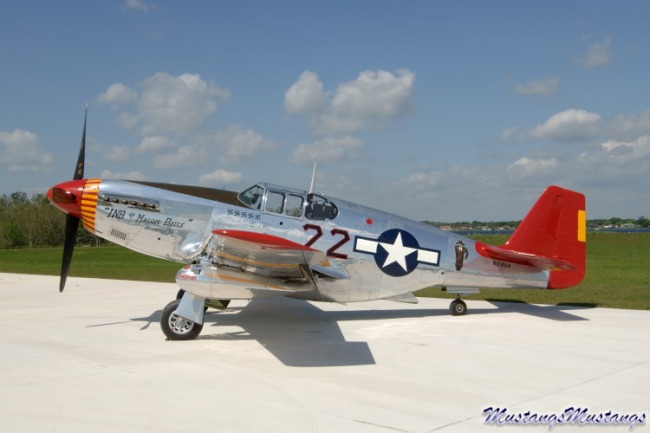 Repainted and sponsored by NBC to fly the film reels of the UK Coronation Coverage. The film would be flown from UK to Goose Bay, Labrador by a Canberra jet bomber. From there, the networks would have to get the film to Boston. The reels needed to get back to the NBC headquarters to be aired asap. CBS, not to be outdone, hired Joe DeBona to fly their reels back in P-51 N5528N. ABC? tried to beat everyone by hiring a Canberra, who's pilot scratched the flight for political reasons. The two P-51s raced and it is rep. that CBS won the flying race, but was not first with the coverage. NBC convinced ABC to share its feed from CBC and both networks aired before CBS.

1960: N1204, Frank Tallman
1985: N1204, Kermit Weeks, Polk City FL
1987: began restoration by Cal Pacific Airmotive of Salinas, CA.
2000: Nov 30, first flight by Kermit Weeks at Salinas, CA.
restoration to honor the Tuskegee Airmen of WWII
2001: Apr 10, 1st place at Sun 'N' Fun
2001: July 31, EAA Oshkosh Grand Champion!
2007: Attended GML in Columbus Ohio. Flown by Kermit Weeks to tribute the Legends of the Tuskegee Airmen in attendance.
2010: Jan 27 - LT Col Lee Archer passed away in Manhattan. Archer was a leading P-51 pilot with the Tuskegee Airmen in WWII. Among his accomplishments was the downing of three German fighters in a single day. Archer was a great American pilot and always had time to talk. He and many like him will be missed.