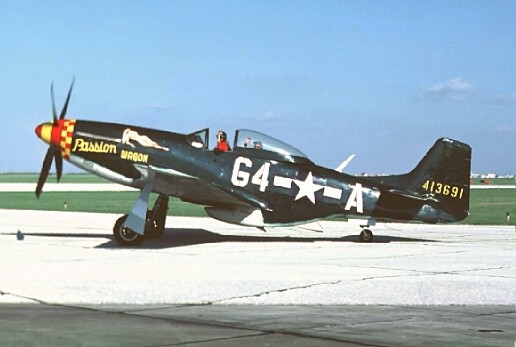 I was a 22 year old girl whose knowledge of WarBirds could fit into a thimble and I was forever changed by that flight. From the beginning as George prepared for take off, his conversation with the tower set the tone for the rest of the flight. The tower did what they normally do and then put in their request for a fly-by. George said something in return to air traffic control that told me we were about to buzz the tower. We did just that, I can't say for certain but I thought I heard the air traffic controllers voice crack as if he was holding back emotions when he thanked George for the aeronautical nod.

My flight was a ride that unfortunately I would not fully appreciate till later. The G-force pulls, the barrel rolls the dives the assents.... none fully appreciated till another date and time. My recollection of George Enhorning was a kind, unassuming man that loved and respected flying. His calm demeanor left me unafraid of every twist and turn and the moments of such force that I could not lift my hand from my lap. His wit as he flipped me and turned me and twisted me had me laughing like a little kid. After a flight like that your life has changed, one I will never forget.

Hearing that George had crashed Passion Wagon was empty news. Made my heart feel empty. These days as I get older and I witness grandparents, parents and friends struggle at the end of their lives I think about George Enhorning and while sad he left this earth far too early, his life ended flying in the most bad-ass propeller driven aircraft and if reports are right, he was able to control the crash away from homes in an attempt to save other lives. My condolences to the loved ones of George Enhorning and the USAF Brig. General that was on board that fateful day.
Dave Jensen
George was like a Father to me Yes he could Fly like a bird and we did almost every weekend but this was long before the Passion Wagon it was in His twin engine Baron is where the Barrel Rolls first Started, his Love of Flying was never ending and if you look up you know hes up there somewhere Chasing Clouds.
Jonathan Geithner
George gave me a ride one day after I refueled his plane. Was working at Chatham while learning to fly. This was in the 1984. So sad to hear if his death.
Shane Grant
I just stumbled over this site. So very cool to see how many people still remember such a great man and a great plane. I was fortunate enough to have spent most of my younger life around George and his family as I was best friends with his step son. A great man, a very smart businessman, an awesome provider and a hell of a person to call a friend. I'll never forget the airshows cleaning his planes, the rides in those planes and the cool parties with the War Birds where we used to sneak beers when no one was looking. And what a pilot. He always said that when he goes it would be in that plane. Miss ya George and thanks for everything you did for me and your family. You were a great man, friend and mentor!
Thomas Franek
I was a neighbor of George and his family in Wolcott, CT. My parents knew George and his wife. Us kids all knew each other. We lived on Hitchcock Lake and I remember as a small kid, the distant distinct rumble of that Rolls engine and I knew it was George coming in over the lake. He would make a couple low passes at what seemed like full throttle. Then his last pass was a dive and barrel roll clean out of sight. I called it the Harley in the sky!! RIP George.
KEN GERKEN
I was a helicopter pilot for Simplex Time Recorder and was at Chatham airport and witnessed that last flight of The Passion wagon. George came in at about 800' below an overcast and
as he broke left downwind the p 51
Continued the roll upside down into the trees.
Later I was told the propeller shaft had broken..
I guess the accident report did not show this.
This was a sad day for me to witness this Event..
Dom Possemato LTC Ret
A bud of mine at OXC (where George kept Passion Wagon on a regular basis) called me up and asked if I would like to give him a biennial review. Of course it was a no brainer.

He was very meticulous on the brief, predeparture prep, flight, and post flight. He did say he was staying with the AC and that he would loose the canopy so that I could bailout.

I went on to fly T-38 as an IP, A-10s in Europe and the US, and the A7. I can tell you that the ride in the Passion Wagon eclipsed all the others.

As a Capt for United and flown most all of our equipment..... that ride made me strive to become a fighter pilot.

RIP George.... a very humble human being and an excellent pilot.
Rob Campbell
Growing up I spent most of my summers in West Chatham on Schoolhouse Pond. The pond was right around the corner from the Chatham Municipal Airport. It was always exciting when the Passion Wagon was in town during the summer. I could tell the distinctive sound of that engine starting up from blocks away. It was a happy time if you got to see him fly. I was sad when my Dad told me about the crash, but what a way to go for both of those gentlemen - each with their own connections to the sky.
Ray Brafford
My father, William R. Brafford Jr, was the crew chief on this aircraft when it was with the NC Air National Guard. I had the pleasure of giving Bill Speers a military picture of the aircraft while attending a P-51 Fly In in California in the early 1990's. Does anyone know what became of the wreckage after the Reno Crash? I know that the cage was damaged but the scrap must be somewhere and I would love to locate it. My father is dead now but any help would be greatly appreciated.
Case Closed! 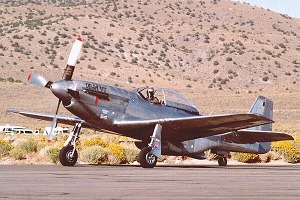