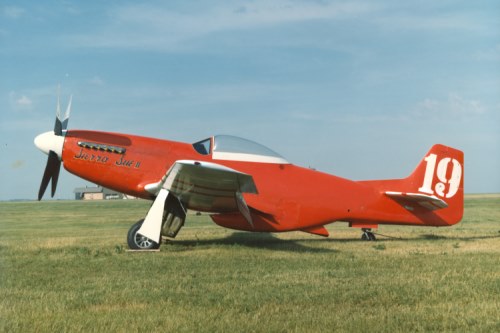 << Case # 323
Who?   Case # 324
Case # 325 >>
P-51 Who? Viewer Responses
William Yoak
I would venture to guess that this was the second Mustang that Dave Allender acquired. He was the previous owner of what became "Miss America" in 1969 after Howie Keefe purchased it. Allender raced that aircraft in both 1965 and 1966 at the Los Angeles National Air Races at Fox Field (in Lancaster, CA). Allender purchased another P-51D during the early 70's with the intent of making a modified racer out of it.I have not seen any photos of that Mustang, but do remember reading about it in "Gentlemen, You Have a Race" (written by John Tegler in the 1980's). According to this source, the Mustang had clipped wings and a "cut-down" canopy in addition to several internal racing modifications. The aircraft supposedly blew an engine enroute to Reno '73 for what was hoped to be it's initial outing around the pylons. The entry of that racer never materialized at Reno and Allender abandoned the plan and sold the Mustang. The P-51 in the above photo is probably that aircraft either before the "mods" were made or after having been converted back to stock configuration.I believe it is more likely that it was after going back to stock, so that Allender could sell it.
Martin / Swiss Mustangs
Same as case #155 Lovely "Sierra Sue" Martin / Swiss Mustangs
T J Johansen
Have seen a photo of N5452V with the cut-down canopy. Same paint job, and a bubble the size of a peanut to look through. Still wears the wartime name "Sierra Sue" owned by Roger Christgau. Allender was a PSA captain if I remember correctly. Anyone know if he's still around? T J Johansen
Dick Phillips
Dave Allender was indeed a PSA pilot, then with Hughes Air West, then Republic Airlines and finally with Northwest. I had been in contact with Dave over the years, concerning this red mustang and he always promised that he would get me some photos that he had in storage somewhere in California, but he passed away about 4 years ago, without ever getting to those photos. As stated, it never reached the racing potential that Dave had envisioned and he sold it to Roger Christgau, of Edina, MN. It is still based at Flying Cloud Airport, Eden Prairie, MN
Jim Taylor
I knew Dave Allender from his days in Santa Maria, CA, back in the late '50s when he bought his first '51 out in the Arizona desert for $1200.00 (with full gas tanks). He bought "Sierra Sue" from the Nicaraguan Air Force. It was sitting static in front of their officers club for a number of years. He got it for $5000.00. The plane was restored in a hangar at Hayward (CA) airport and I had the distinct honor of removing a lot of paint from its wings. When I stripped the Nicaraguan insignia from one wing, the crown and circle of the Swedish Air Force showed up. Under that was the rondelle of the RAF! At this point Dave started researching the history of the plane and (as he told me) he said it was manufactured in England under license to North American specifically for the RAF and was never a part of the USAAF. I remember seeing some photos of the plane when it was finally ready to race. It had the bubble cockpit which was taken off when he decided to sell it. His wife, Sue, was the principal reason for the sale--she wanted to buy a house--so much for air racing. Dave had two sons who, I've heard, still reside in the San Mateo area. I'm sure they have all the pictures of the plane.
Richard McGuire
Hi Interesting reading. My father was an officer in the Nicaraguan Air Force in the 1950's when these P-51's were active. Does anyone else have further information of surviving FAN (Nicaraguan Air Force) Mustangs? Richard
Larry Lowe
A photo of the racing configuration can be seen at: 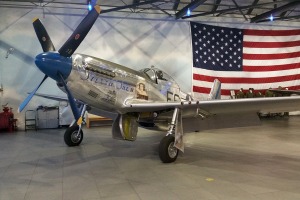