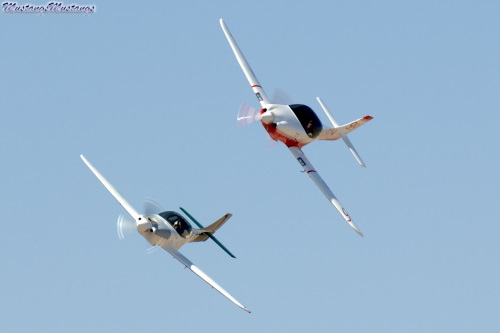 The second fastest prop racers at Reno is the Sport Class. With speeds from the low 200's to the upper 300's, the sport class covers a wide range of aircraft types. Out of a 24 racer field (27 qualified), there were 9 Lancairs, 7 Glasairs, 2 NXTs, 1 Thunder Mustang, 5 Harmon Rockets, 1 Swearigen, 1 Vari-Eze and 2 custom builds. The majority of the racers, about 14 are between 250 and 300 mph. Only the top six can break the 300 mph barrier, with the top two going over 350 mph! That's pretty fast and competive with the bronze unlimited speeds.

The top qualifier was John Parker in the Thunder Mustang at 362 mph. Close behind is last year's champ Daryl Greenamyer at 358 mph in the Lancair Legacy. Third qualifier was Kevin Eldridge in the sleek looking NXT racer. Eldridge clocked in at 336 mph during qualifying.

As soon as heat races started, Greenamyer pulled ahead of Parker and never relinquished his lead for the rest of the week finishing with a fast time of 364.9 mph on Sunday! Now, how long until these guys push over that 400 mph mark? Amazing speeds.

John Parker in the Thunder Mustang took second each heat race and in Sunday's Gold with a 355 mph finish. That sleek white/blue NXT with Kevin Eldridge inside finished third all week. Get this: the top seven (7) positions never changed after the first heat race.

There was always some good close racing going on. Check them out in 2006.