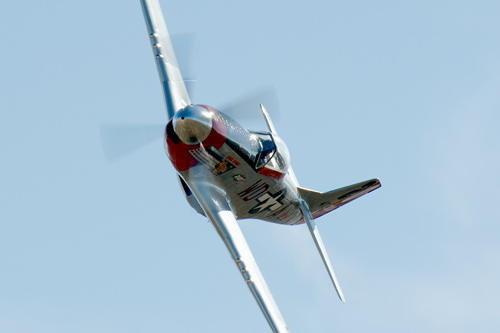 Thursday's heat saw the top six qualifiers, Penney, Sanders, Martin, Dawson, Pardue and Gibson, sit out with a bye. The rest of the field was split into three heats. A few slots changed up as Michael Brown in #911 September Pops finished 1st in Heat 1A at 411 mph while faster qualifying rookie Steve Patterson in #71 Southern Cross finished 4th at 402 mph. Bill Rheinschild switched spots with Matt Jackson in Argonaut and the other rookie, Fred Cabanas, maintained his location. Howard Pardue pulled out during lap 3 with some wing skin problems.

Friday brought out the big guns for the first time against each other, but it was a yawner (well 450 mph up close is never a yawner ... but) with all six maintaining their positions and keeping the speeds respectable in the 440-450s for the top three. All racers finished as expected: Rare Bear, Dreadnought, Ridge Runner, Spirit of Texas, Fury, Riff Raff, September Pops. No problems, no maydays just a clean safe heat race. The wind picked up later in the afternoon at 16 knots gust to 22 knots. It's wierd not to be talkling about Dago Red, Strega, Miss America or even Voodoo when you talk gold unlimited.

Saturday's heat 1A added Bill Rheinschild to the field, coming up from Friday's Silver as Bill held off Matt Jackson in Argonout during a close race. Still the top four stayed put as Rare Bear won at 461 mph. Everyone else was spread out except near the bottom with Rhino and September Pops at 401 and 400 mph. Gibson in Riff Raff moved up to 5th passing Pardue in #13 Fury. The bright new paint job on September Pops was easy to see, but the Sea Fury finished last in this heat at 400 mph. Again, no problems, no cuts, no maydays.

But wait, they took the spinner off of Ridge Runner and are looking real close at some oil coming down the nose of the prop. Problems? Don't know for sure, but the prop is coming off. This is a new race prop for Dan this year (P-51H variant) and I think he's been happy but not overly excited with the results. Is this a bad thing? We'll see. But wait again, the Strega crew is busy in the pits ... and they're taking off the witches' prop.

Hmmmm. It's been known for a long time that Tiger has this exceptional prop that gives him some extra speed. I'd bet that Dan would sure like to try it out ... and he will get that chance! Strega's prop is going on the front of Ridge Runner III - the last of the Gold P-51 Mustangs surrounded by heavy-prop-wash Sea Furies and a multi-champ Bearcat. Dan Martin will have to fight for all the P-51s who used to be in the Gold Race on Sunday. Will the new prop be enough? Does he have more left in the Air Sparrow V-12? Dreadnought has been doing low 450's all week and not showing signs of slowing and Dreadnought has been the only Sea Fury to ever win at Reno. They did it twice: 1983 and 1986. The Bear has looked strong and nobody knows how much faster he can go this year.

So let's go race and find out.

Coming down the shoot, they look great but Martin looks like he's behind a bit. They pass right over me and several other photogs at pylon 2. Martin is a bit behind but coming hard and moving outside. Over the hill and outa sight for a moment then coming around pylon 4 and 5, then down the valley of speed, Martin passes Dreadnought with speed to spare and looks for the Bear. Bear's ahead and going fast. Martin pulls on Dreadnought but does not seem to gain or lose ground to Rare Bear. The Bear is ahead by a fair margin after a lap but not too much (what does that mean? I don't know, maybe 4 seconds). Ridge Runner is all out and holding pace. Well, maybe we will have a race afterall. The top 2 come screaming around the pylons at over 460 mph. Clockers (unofficial) in the pits put Martin at about 467 mph! That is huge for a stock airframe. GO Danny GO! Shouts and cheers come from fan/photographers out at the pylons (muffled cheers as their faces are smashed to the backside of their expensive cameras).

I'm listening to my scanner on race freq while taking shots of some of the slower Sea Furies rounding #2 and I hear *&^% mayday. Who? I turn and look and see a mustang silloute shooting skyward above the valley of speed. NO! NO! NO! CAN'T BE! Martin in his P-51 Mustang Ridge Runner III, Race #20 is out. But what a great run.

The rest of the race is still going strong with only 3 laps in the bag. Penney in Rare Bear is way ahead of Dreadnought and powers back a bit after Ridge Runner exits. The racers all spread out over the course with no close racing going on. Hey, it's still fun to watch warbirds at 50-100 feet agl going over 450 mph even if they aren't chewin' tails. We watch and wait for any other suprises while Steve Hinton flies up next to Dan Martin who is high overhead with a smoking and ailing merlin V-12. Martin looks good and sets up for a landing on 14 which he performs with no trouble. His racing merlin is still turning as he rolls out and stops. The rest of the race is without any trouble, all racers safe.

With history in the books, Martin starts out in the Sunday Gold as the only P-51 Mustang and ties history. What? 2005 and 1975 are the only years that all the P-51s in the Gold race did not finish. In 1975, a total of four P-51s were set to race in the Gold Final, but during the race Ken Burnstine in "Miss Foxy Lady" DNF lap 6 from a backfire that blew off the intake trunk and lower cowling (like Miss A), Clay Dlabo in "Iron Mistress" finished but had multiple cuts and was credited with only 4 laps and a DNF, Cliff Cummins in "Miss Candace" DNF lap 2 with a burned piston (Dan Martin 2005) and Gary Levitz in "Precious Metal" finished 3rd but DQ'd for crossing deadline. So history was made (MustangsMustangs unofficial) this year.

I gotta congratulate Dan for going for it. There might be some of you who say "he should have cruised around at 440 or high 430's and took a very respectable 3rd place finish". Maybe, but that's not the Dan I know and when will Dan have another shot like this? He's the top P-51 this year, no Dago, no Strega. He has the speed to get by Dreadnought. All he has to do is pressure Rare Bear and you never know what could happen. One cut or mechanical problem and Ridge Runner III is parked in front of the grandstands. Yeehaw!

Could Dan have passed the Bear? No, not if the Bear stayed healthy, but you have seen top racers not get through the week before. A few years back, Strega was leading Dago until last half of the last lap when Strega pulled out with a fried motor. You never know. Great job flying Dan and great power from Air Sparrow's V-12 racing merlin. My congratulations for going for it all ... so close.

Congrats to Rare Bear, John Penney, Lyle Shelton and crew. During the evening awards ceremony, John Penney annouced his retirement from air racing. Ron Buccarelli will take his place next year. Penney has raced many years and won the Unlimited Gold in 1994, 2004 and 2005. Thanks for many years of great flying. Owner Lyle Shelton is no stranger to air racing. Back in 1965 he raced a P-51 "Tonopah Miss" #12 to a sixth place finish at 332 mph. Shelton also won in Rare Bear many times since then. They got two in a row under their belt now and have proved that after a reign of eight wins in a row by Dago Red and Stega combined, the Bear is back.