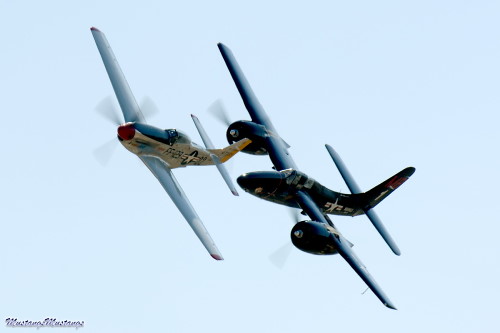 Stuck in the middle with P-51s, Sea Furies, a Bearcat and a Tigercat, the Unlimited Silver has a constantly changing field of racers throughout the week. After a day's heat, the Silver (Heat 1b) winner will move up to Gold (Heat 1a) the following day. The number of racers in a heat changes each day adding one (winner from lesser heat). The first day of unlimited racing, Thursday, creates a one day heat called "Medallion" for qualifiers 21-27. Depending on how you finish that heat, your next race day might change. Lower finishers will not race on Friday, taking them out of any chance to progress to the Sunday Gold. If the full field is healthy, the bottom three finishers in Medallion will not race until Sunday Bronze.

Each day is a slightly different look with the movement between heats. Hoot Gibson in "Riff Raff" was the 2004 Silver winner, posting a speed of 414 mph. Gibson actually finished 2nd, but Brent Hisey in "Miss America" won at 417 mph, but forfeited the spot to move up to Gold where he finished 7th. There is usually some very close racing in Silver.

After a rookie-rookie one-two punch finish on Saturday, Fred Cabanas was moved up to the Gold Final leaving Steve Patterson holding the pole for Silver. On Sunday, Matt Jackson and Steve Patterson dueled it out in Sea Furies from start to very close finish. Jackson in "Argonaut" just outstretched Patterson in "Southern Cross" as they crossed the line at 410.4 and 410.0 mph. Patterson had the pole for taking second on Saturday with Jackson third, but Matt made the pass and stayed out in front till the end. Congrats to both Jackson and Patterson for some very nice racing.


Ike Enns and John Bagley ran very close in numbers as they did on Saturday. Both days they stayed within 1 mph of each other. In fact, Bagley was looking at the rear of Enns' Miracle Maker on all of the heat races. Some other close racing for Silver racers was on Thursday's Bronze heat. Bill Eberhardt somehow kept Mike Brown from chewing off his rudder. They both flew very well as the P-51D held off the much larger Tigercat.

Joseph Thibodeau who owns and flies the P-51D "Crusader" had the mustang in a hangar for much of the week. Not sure what the issues were, but they did have some issues. They flew (high) in Thursday's heat at 347 mph, but did not fly on Friday or Saturday and were out.

Other racers usually in the silver that were missing were Miss America who is usually at the top of the silver come Sunday. Miss A was out on Tuesday with a blown merlin. Also missing was Jimmy Leeward. Leeward was cruising around in Bronze. He did not start for Saturday's Silver race which dropped him down to the Bronze on Sunday. Leeward (in Cloud Dancer P-51D) is a great entertainer and he showed us some good flying in the Sunday Bronze as he hugged the wing of Dave Morss in Polar Bear.

All in all, a great week of Silver racing. By far the closest racing during the week and well worth checking out next year.